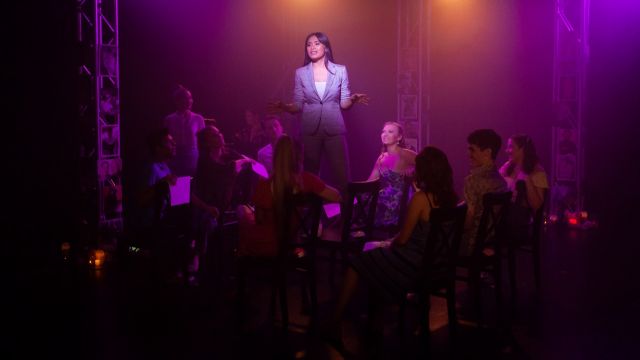 William Finn’s Elegies has love, loss, and a smattering of humor in its life-loving song cycle of family (particularly Jewish New Yorkers), friends and acquaintances. Using 9/11 as his jumping off point and also reflecting on the AIDS crisis, the songs chronicle the lives of those Finn has loved and those who have died in tunes that are melodic, catchy, and tellingly simple. Normally staged with a cast of five, this production uses twenty-three on basically a bare stage except for four meccano-like towers on which the cast pin photos of the characters they sing about.

Jason Langley’s direction was imaginative and fluid and with the occasional use of chairs as props, and some arresting lighting by Tom Dodds, the show was an elegant 90 minutes of contemporary musical theatre. During the rehearsal process the cast and director shared stories, and these coupled with some research and personal interviews formed the basis of a text to sit alongside the existing score. I’ve never seen the show before so can’t say how this material interacted with the original, but what I can say is what was on offer last night was extremely effective. 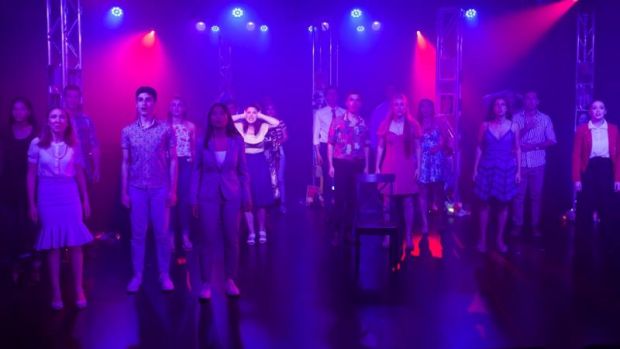 First to impress was Danielle Remulta with a poignant piece about a shop across the street that was there one day and gone the next (“Mr Choi and Madame G”). Paris Valentino followed with a song about an unmarried and childless teacher reflecting that if “Only One” student is inspired by her teaching then that is enough, whilst quirky comedy came with Hannah Gardiner’s “My Dogs”, a litany of her experiences with dogs who died.

Thomas Currie and the guys gave heart to “Mark’s All-Male Thanksgiving”, a tender piece about AIDS loss, Liam J Kirkpatrick’s “Saying My Goodbyes” and Kaitlin Nihill’s “Boom Boom” were chilling reminders of 9/11, when someone makes a final phone call before the towers come crashing down, with light relief coming in the breezy ode to “Joe Papp” sung by Jake Tolich and the guys.

A Jewish family celebrating “Passover” was a chance for the whole company to sing about matzo balls and such, whilst Nina Lippmann as Finn’s mother Barbara recounted her family growing up in “14 Dwight Ave, Natick, Massachusetts” which had genuine pathos. 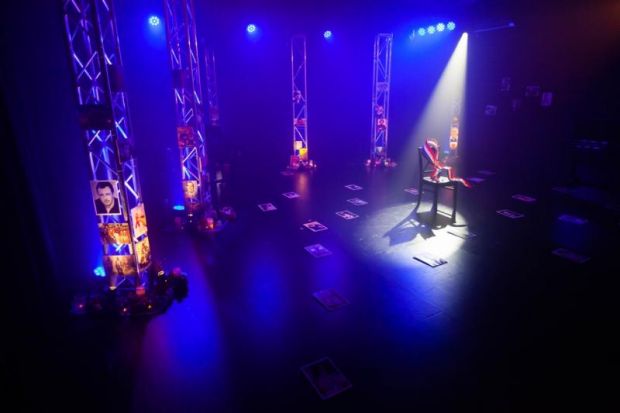 As usual the choral arrangements and harmony singing of the group were faultless, with Heidi Loveland’s piano accompaniment a lesson in dynamic light and shade.