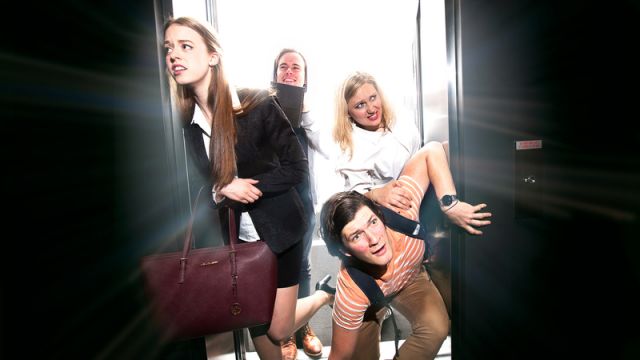 Being a little claustrophobic myself I can’t think of anything worse than being stuck in a lift with 3 complete strangers. Seems an unlikely premise for a musical, but it really works!

Four seemingly unrelated people enter a lift, only to have it break down and force them to be trapped in uncomfortably close proximity for more than 26 hours.

This is a true ensemble piece (written by the performers themselves). During an all too brief 55 minutes we meet Louis (Josh Gardiner) who initially keeps to himself but eventually we discover has been in love and following Claire (Imogen Moore), a para-legal secretly for 6 years. She has been too focussed on her career to notice.

Then there is Jason (Sam Bennett), the innocent bystander who is trying to get his brother’s severed finger back to him in the hospital before it’s too late. Finally, we meet Meg (Jordan Barr) a liberated woman who should, but doesn’t, care about her life and casual relationships; or does she?

Add Shannon Whitelock (accompanist) to this extremely talented group and you have a night out that is guaranteed to have you laughing and leave feeling that you have shared the lives of 4 extraordinary individuals.

The Tuxedo Cat is a good choice for this piece. It is intimate, friendly and allows the audience to be up close and personal with the actors. A simple square outlined with strip lighting defines the lift with the pianist sitting alongside.

All the performances are solid, well defined and well performed. Their voices blend well and the show is full of perfect harmony and clever choreography, particularly given the narrow confines of the performance space. Naturally the audience (and I) have their favourites.

Louis and Claire’s Tinder date song is an audience pleaser and rings true in today’s dating society. In fact, Tinder features often during the show.

Jason’s character is appealing. He is trapped with 3 people he can’t really relate to and only wants peace. Bennett’s portrayal is powerful.

Jordan Barr’s voice is a delight. Her ability to high belt adds another dimension to the show. Claire’s focussed, self-absorbed character is a perfect contrast to Louis’ love-sick puppy. We feel compassion for him, particularly at the end when they are released from their ‘prison’. His last gift to the lift is a masterstroke.

The audience and I loved the show, especially the joke about Adelaide blackouts. However, I was concerned about one thing. There is an anonymous fart during the 26 plus hours in the lift. I am sure if I was there I would need to use another bodily function, but then we don’t want to see that in a musical, do we?