Elling, adapted from the film by Simon Bent 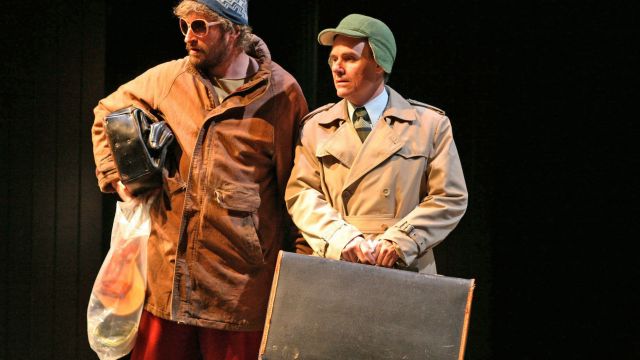 Adapted first for the stage from a Swedish novel, then from stage to screen, and then again back to stage from the screenplay, this very warm and poignant tale could be loosely described as 'The Odd Couple flies over the Cuckoo’s Nest.' It’s neither as light nor as dark as either play, nor are its themes particularly revelatory – however Rabe’s unconventional staging still gives it that ‘edgy’ feel. Darren Gilshenan literally pours his impressive pedigree of Shakespeare and comedy experience into the role of Elling. At the risk of being too gushy – his is a folkloric performance. He gives this impeccably neat, agoraphobic, delusional momma’s-boy such warmth, dignity and complete physical immersion that it’s difficult to imagine anyone else in the role. Lachy Hulme cleverly underplays his offsider, Kjell Bjarne - which bathes the character’s darker, more repugnant and downright irritating qualities in innocence and charm. The quality of all the performances make it very hard to complain about the running time, but the script could definitely use a slight trim. And while the aforementioned quirky staging provides as many ‘what the?’ as ‘wow’ moments - any small quibbles are squashed by the knowledge that one has witnessed what would have to be a once-in-a-lifetime portrayal of this endearing man called Elling.
Rose Cooper