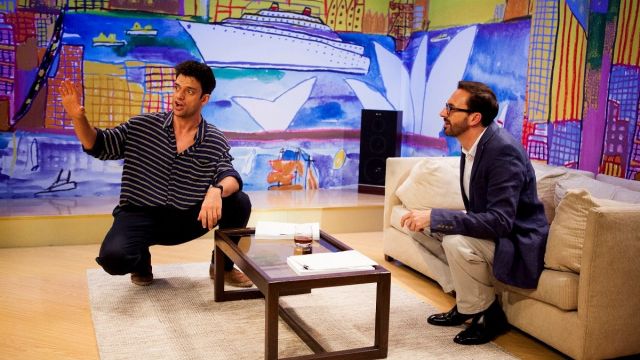 When a David Williamson play opens at Sydney’s staid Ensemble Theatre — and there’s a new one every season — the mainly-older subscribers audience laugh from the off. He’s their (72-year-old) boy. But — guess what! — at this unexpected revival of his 1987 Emerald City by the committed, fiery Griffin Theatre Company a younger, trendier audience also laughed throughout and raised the roof at the end.

Williamson’s speed of thought, excellent jokes and recognisable Aussie characters and situations have kept him at the top of our heap for nearly 50 years. This excellent production reminds us of his bulging filing cabinets, of his seemingly inexhaustible stream of theatrical wit and wisdom. 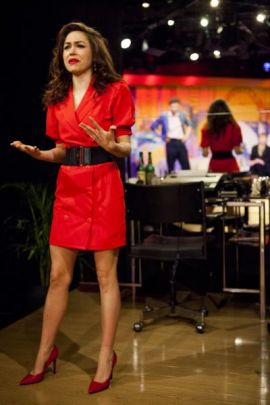 The Emerald City here is gleaming, plentiful Sydney. Williamson himself, his publisher/writer wife and young family had followed the yellow brick road there from sober Melbourne in the 80s. The play’s antihero Colin writes screenplays for Australian movies, a tricky area that Williamson knew all about.

In fact the play is hardly about the differences between Sydney and Melbourne, much more about the state of Australian cinema in the 80s, the awful urge to establish an American-style culture here to the detriment of local stories and culture. Williamson’s seething, satirical anger is dumped more on hollow Hollywood than on guiltless Melbourne.

As Colin (fast-talking Mitchell Butel) struggles to keep his artistic integrity intact, so his socially conscious wife Kate (Lucy Bell), promoting literary Aboriginal writers, is drawn by the allure of money and fame. Colin’s siren is the grasping, talentless Mike (Ben Winspear) who moans that he can’t “pre-sell our movies to the States with unknown [i.e. Australian] actors in the lead”.

The course of Lee Lewis’s lightning paced, physically aware production has not been smooth. Winspear took over the key role from an actor who had “dropped out due to ill health” with only six days to go. There are signs of tension on opening night.

The portrayal of 80s Sydney, thrusting and dazzling, is wonderfully aided by the participation of iconic artist Ken Done, whose cut-up vision of the harbour forms a brilliant backdrop for the first half. Who wouldn’t sell their soul for a view like that!

Lucy Bell is quite wonderful is Kate — angry, tortured, treacherous, loving. It was fascinating to be reminded that her father, the great and retiring John Bell, had played Colin in the original 1987 cast. 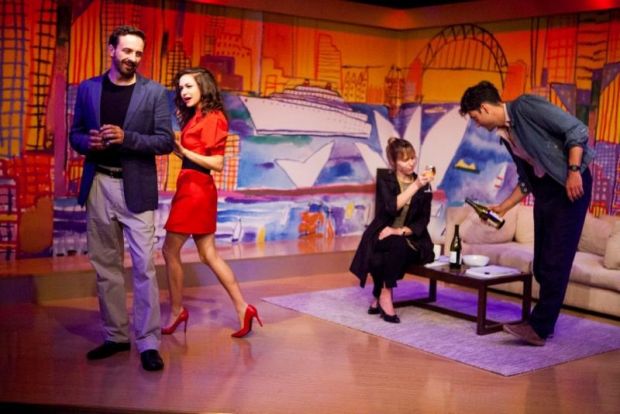