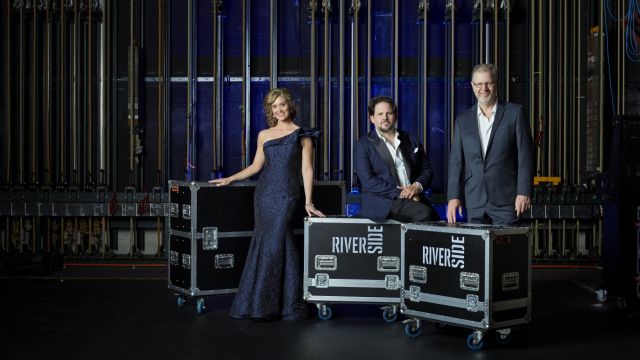 While some of us watched and listened online, an excited – albeit socially distanced – audience were welcomed back to Parramatta Riverside Theatre for An Enchanted Evening of music. Enchanting it was, bringing some of the most famous arias and love songs from opera and musical theatre on to a stage that has been bereft of a live audience for a long six months.

Accompanied by the much-loved and very versatile musical aficionado Guy Noble, celebrated soprano Julie Lea Goodwin and acclaimed tenor Daniel Belle seduced their theatre-starved audience with a program that was testament to the powerful range and control of both their wonderful voices; a program that must have filled the theatre with echoing music – but which also gave those of ‘isolated’ at home the chance, via some excellent use of technology, to experience the performers more ‘up close and personal’ than a stage usually allows.

Both performers are no strangers to the emotional tension of the characters they portray in both opera and musical theatre, and were able to bring that depth of portrayal to the concert stage. Whether in their evocative rendition of “Tonight” from West Side Story, or that most famous operatic love duet “O soave fanciulla” from La Boheme, or the very moving “If I Loved You” from Carousel, both were able to portray the emotions that drove the characters – as well as making their musical declarations of love hauntingly beautiful.

The choice of music allowed the audience to hear the immaculate control and power of both performers, and the amazing extent of their musical range. Goodwin with “Musetta’s Waltz” ("Quando me'n vo”), and a thrilling rendition of “I Could Have Danced all Night”. Belle with the very stirring O Sole Mio” and “Granada”. And, again together, at the end of the evening with “Time to say Goodbye”.

The choice of music also allowed Guy Noble to display his familiar expertise as accompanist, performer … and comedian! His cheeky parody of “When I was a Lad” from Pinafore brought some topical humour which Gilbert and Sullivan would surely have approved. Here’s a sample!

I really wish would disappear

This virus thing is a pain in the arse

It’s hard to play and dance and sing

(If you’d like to hear more, check online for the rest of this and Noble’s other tribute to “The Virus”).

This latest in Riverside’s contribution to keeping its patrons entertained during this difficult year is further proof that the arts are alive and fighting the effects of the virus in every way possible in Western Sydney. Let’s hope the success of this Enchanted Evening is a happy harbinger of great things to come.