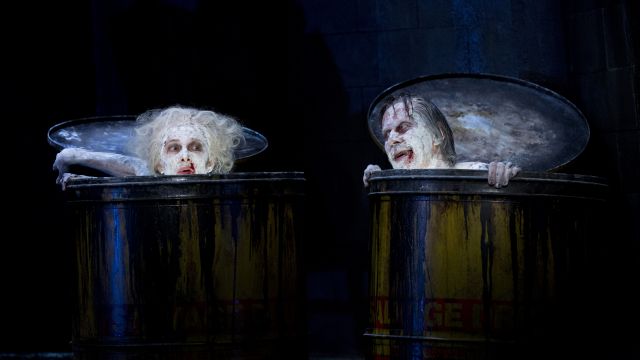 The state companies of Melbourne and Sydney are both currently staging Samuel Beckett’s Endgame, both no doubt careful not to counter his notoriously prescriptive executors.

Thus confined, the STC sets this dark absurdist tale of nothing inside a towering leaking structure with just two windows, effectively designed and lit by Nick Schlieper.  At the bottom, blind and strapped to a wheelchair, the tyrannical Hamm (Huge Weaving) bullies his emaciated servant, Clov (Tom Budge). Nearby, now abandoned in giant bins, his fond parents occasionally bob up for sweets and nostalgia.

This is truly the endgame of life and Weaving plays out the repeated stories, word games and deadpan humour like a real fruity-voiced thespian, a connoisseur of impending mortality working away his busy fingers like a mad Steptoe. As Clov, Budge has the occasional droll wit of the dispossessed but, as the only character with working legs, his physical comedy is, I suspect, entrapped by Beckett’s 60-year-old prescriptions. Those repeated moments of vaudeville have now lost much of their humour, even if the hopeless circularity of Becket’s theme is underlined. Indeed, comedy and empathy is in this production largely sacrificed as a provider of much relief, as we move to one of theatre’s most lonely and despairing conclusions.

Director Andrew Upton though has elicited fine performances, including from Bruce Spence and Sarah Peirse as the parents.  Here is some relief. Caked in clay, zombie-like but with dark ringed eyes flashing, their Nagg and Nell still share a demented humanity – even if it is now legless and binned.