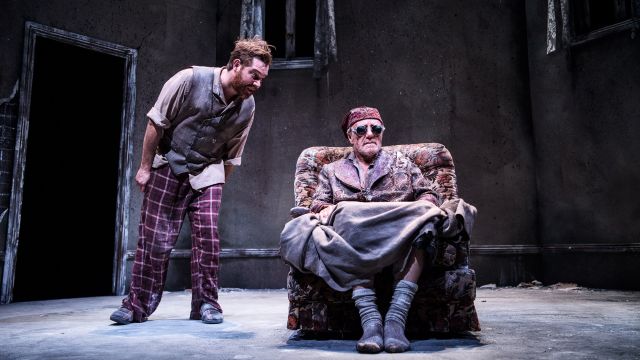 Specifically grim but never merely glum, Director Michael Futcher fully taps the self-conscious theatricality of Endgame, Samuel Beckett’s play, without letting us forget that its strange figures are appallingly real, enacting a grotesque pantomime of humanity’s hungry need to distract itself by wresting order, meaning and a sliver of satisfaction.

No one pokes fun at the misery of existence with the crystalline lines of the late master playwright Samuel Beckett. The problem has always been finding actors who can deliver those lines with the exact flavour of irony and detachment that Beckett calls for. If the actors play a little too hard, the shivery weirdness of the atmosphere is dispelled by the kind of hearty, knowing laughter that signals both relief and self-satisfaction. If they don’t play hard enough, on the other hand, the evening becomes a dutiful ritual: We learn from an acknowledged master of 20th-century literature a few grim existential lessons.

The majority of the play follows the scattered dialogue between Hamm, portrayed with an intense brilliance by Robert Coleby, and Clov, played perfectly by Leon Cain. The world of Endgame is mostly unclear, purposefully. Hamm is both blind and unable to walk and relies on Clov, who is unable to sit, to do his bidding. 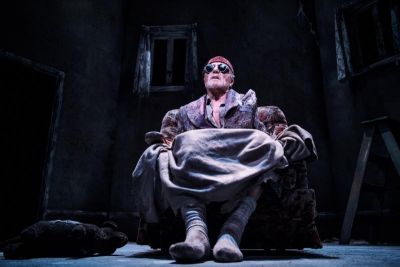 The characters reside in a dank, decaying bricked, cell-like space with nothing but two windows to give any appearance of an outside world. The other side of their confines is likened to hell; they live “down among the dead.” Or maybe its purgatory and their existence is then just a waiting game? Hamm repeatedly begs Clov to finish him, death being the only escape worth looking forward to.

Meanwhile, over in the corner of the bunker, two other survivors of whatever disaster has befallen humankind live side by side in his-and-hers garbage cans – Hamm’s parents, Nagg (John McNeill) and Nell (Jennifer Flowers), portrayed a beautiful non-physical love that could be felt by the back row.

Any effective production of Endgame has a similar impact, yet Shake and Stir – yet again – seem to give the show an unsettling edge. Everything from the beautifully minimalistic stage design by Josh McIntosh, through to the distinctive attention to detail in the costume and make-up of the four performers, created an atmosphere that you couldn’t help get caught up in and feel a little connected to, in our own way.

As Nell says, “It’s like the funny story we have heard too often, we still find it funny. But we don’t laugh anymore”. If you are one of the lucky audience members who gets a chance to witness this production, it is one of the best homages to the Beckettian name.