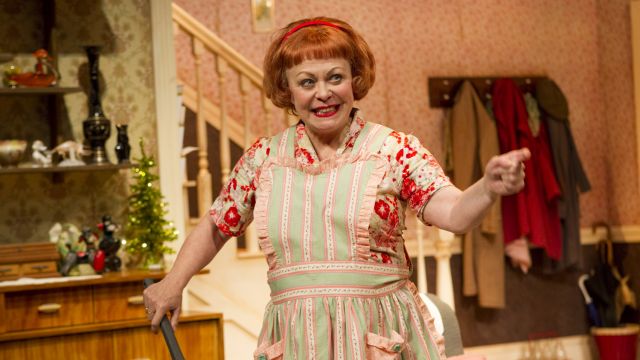 Entertaining Mr. Sloane by Joe Orton tells the story of a teen boy who takes up lodgings with the sex starved Kath and her elderly father after a chance meeting at the library. Kath’s live-in father, hard of hearing and slowing in memory, recognises Sloane from the past and identifies him as the murderer of his old boss. So infatuated by Sloane is Kath, that she pays no attention to her father’s warning. Kath’s controlling, elitist brother Ed disapproves of Sloane lodging with his sister, but in a subconscious admission of homosexuality sees an opportunity to employ the boy as his chauffeur and quickly has him dressed in a kinky leather uniform.

When it opened in London in 1964, the piece was unconventional, exciting, and sexually explicit. Much of the play’s edge remains today, despite the liberality of our 21st century society. The overriding theme throughout Orton’s comedy is sex. With the exception of Kath’s father Kemp, the characters are so preoccupied with their own sexual gratification that even murder becomes a regrettable, yet excusable occurrence from which benefit can be gained.

Kath, played by Jacki Weaver, is the character most openly hunting for sexual satisfaction. Weaver’s portrayal of Kath is outstanding. Her naivety and daftness are combined beautifully with her need for control and fulfillment – and it is clear that Kath will get it at any cost.

Ed, played by Sean Taylor, is horribly chauvinistic and a complete megalomaniac. Taylor executes the character with authenticity and conviction, perfectly portraying Ed’s self indulgent, bigoted nature without compromise during his homosexual interludes with Sloane.

Dennis Olsen was Kath’s father, Kemp. Olsen’s character had a due amount of frailness and age, though some of the dialogue was occasionally difficult to hear through the heavily aged droll.

In the title role of Sloane, Renato Fabretti was satisfactorily coarse and street wise, but didn’t seem to quite go far enough in his portrayal. It would have been nice to see Sloane get more anxious, more angry, more smarmy and cocksure. In the scenes of violence, it was obvious that he was holding back and not entirely committed to the character’s erratic and uncontrolled outbursts.

The turning point in Entertaining Mr. Sloane comes right near the end of act II. After the murder of Kemp, the play changes from a light sexual comedy to much darker look at humanity. More intensity was required from Fabretti in the “beating of Kemp” scene to make it as truly violent as it should be. Unfortunately this scene was more-or-less laughed over on opening night, which left the audience playing catch up, and mostly missing the severity of Sloane’s actions and the implications of the subsequent bargaining with Ed and Kath.

This production was a pleasurable evening of theatre, which, with a tweak of intensity, could really lift and soar.