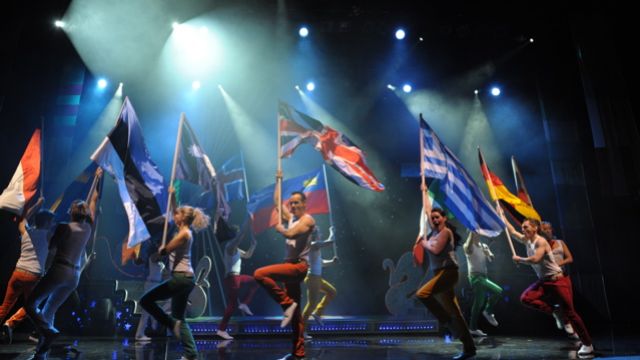 Eurobeat is funny, frivolous, and fabulously over-the-top. Opening last night at the Lyric Theatre, this send-up of Eurovision, the song competition that everyone loves to hate, was launched with a deafening sound of clackers, whistles and cheers, the like of which has not been seen in a theatre for some time. Added to this is the unique experience of being able to use your mobile phone to vote for your favorite act. Craig Christie and Andrew Patterson’s score clones Euro pop with deadly accuracy, and the cast excel in delivering laugh-out-loud funny performances of the songs. Highlights were the wonderfully bad UK entry “I Love To Love To Love (Love)" sung by Reyne (Mathew Robinson) and Sheiner (Natalie K. Marsland), Hungary’s hysterically funny “Apro Madarakkal” sung by The Molnar Sisters (Liz Buchanan, Raelene Isbester, Jem Mortimer), and the Russian KGBoyz with “Ice Queen” (Matt Heyward, Mark Hill, Cole Rintoul, Nicholas Skubij), who skewered the moves of every boy band ever known and ended up winning the competition last night. Glynn Nicholas got maximum laugh mileage out of his host Sergei’s character, with Rhonda Burchmore’s co-host Boyka, whose running gag was a change of costume at her every entrance, as a delicious foil. Burchmore’s big moment came in the second act with “I’m Sarajevo (Taste Me).” Dressed in a turnip costume, and assisted by the company, it was one of the night’s show-stopping moments. Special guest Colin Lane (one half of the Lano and Woodley comedy act) wearing a belt that flashed “Vote Ireland,” nailed that country’s entry “La La La,” and had the audience happily singing along. This role will be shared with Wilbur Wilde and Glenn Shorrock during the season. Eurobeat is a brilliant concept and a marketer’s dream. There has to be more merchandise on sale for this show than Mamma Mia or Phantom of the Opera. It’s a great night in the theatre, and without a doubt, the funniest production of the year.