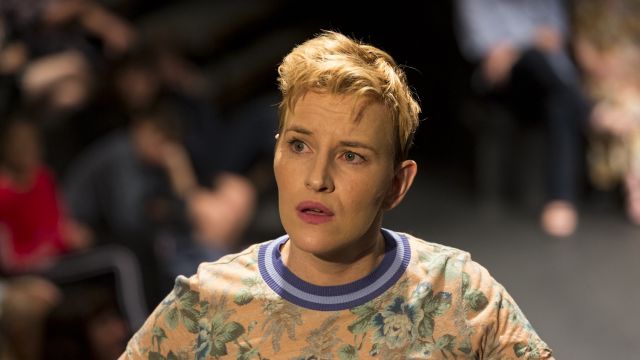 A one-woman play dealing with depression and suicide doesn’t sound like fun. But Every Brilliant Thing is one of the most entertaining - and touching - solo performances in years. Thanks, in no small part, to the performance from Kate Mulvany.

These days, Mulvany is not just one of the hottest stage actors in the country but one of the best playwrights too. Her adaptation of Mary Stuart for the Sydney Theatre Company in February was stunning - even more successful than her epic reworking of the Harp in the South novels last year. She also adapted the Australian novel Jasper Jones, which had a very successful run across the country. As an actor, she’s made headlines in Richard III and Tartuffe. She rarely puts a foot wrong.

And here she’s agreed to do a play that’s earned acclaim around the world for its co-writer and charismatic performer, the British comedian Jonny Donahoe. Mulvany makes this show her own and earns an emphatic standing ovation from the audience. The reason - the way she engages us so completely in the narrator’s touching and troubling life stories. The play is structured around a long list of life’s little joys (or “every brilliant thing”) that our host began compiling at the age of six. Number 1 is icecream, 2 water fights, 7 people falling over, 994 “hairdressers who listen to what you want”. Audience members are asked to call out these various brilliant things and to help tell the story in other, captivating ways too.

The protagonist began compiling the list when her mother tried to take her own life. The purpose was to highlight the good things that we experience every day for someone struggling to see them. It was needed at various points in the narrator’s life - and not just for her mother. From this list, she tells us of her ups and downs over the years, dealing with depression and working out how it affects so many people in all manner of ways.

The play is brilliantly conceived and very-well written - its genius is in finding such an enthralling way to deal with the most serious of issues. Every Brilliant Thingtells us that we all deal with happiness, sadness and even more difficult things. It never dismisses any way of coping - or struggling - with what’s thrown at us.

Performing in the round, with the audience surrounding her on a customised Belvoir stage, Mulvany is expertly directed by Kate Champion. She improvises with what the audience gives her but never gets off track. It’s wonderful theatre, starring one of our best theatre-makers.

Two more things for any list of brilliant things: this play and Kate Mulvany.