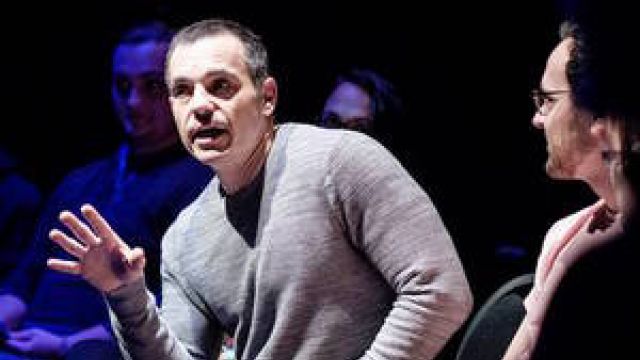 I rarely leave my living room to go to the theatre in a living room, but ​Every Brilliant Thing​ is just what the name describes. Beginning its life as a short story by Englishman Duncan Macmillan and now performed by Canadian Michael Torontow, it is the story of one troubled boy becoming a man, one whose whole life is spent dealing with depression and suicide. Sounds miserable, but this artful monologue is entertaining, uplifting, informative and deeply insightful.

The 130-minute performance starts and ends with a bus ride from Hackney to Grange and whilst this seems a little timewasting, it enables both the audience and performer to experience the reality of mental health issues where they actually happen, right in someone’s home. There are many alerts about the subject matter pre the show and great care is taken at all stages to ensure that the audience members are safe and supported.

The performer rides on the bus, and as part of the show persuades everyone in the audience to take a card, from which they will, when invited to, read out the message contained. It is both intriguing and a powerful ‘hook’ involving us all. Several audience members went on to assume pivotal roles in Torontow’s story.

We are introduced to the boy whose mother has just made her first suicide attempt. We also discover that the boy has just experienced the impact of death, when his pet dog had to be euthanised. As sole performer, Torontow moves between the adult guiding the audience, who rapidly become part of the story telling, to a vulnerable seven year old who uses a list as a refuge from reality to cope with the pall of his mother’s depression, her attempts to end her life, as well as his father’s mercurial moods.

To deal with his mother’s abject misery, the boy starts a list of ‘everything that’s brilliant in the world’ and he attempts to change his mother by sharing the list with her. This fails, but the boy carries and adds to the list throughout his life and his own recurring depression. The final list is of more than one million ‘brilliant things’ in the world.

Torontow is charismatic, engaging and vulnerable. His ‘one-liners’ are perfectly planted, his pauses are purposeful and the audience is in his thrall throughout. We leave with a deeper understanding of death and depression, celebrating the fact that there are at least one million ‘brilliant things’ for us to live for.

Do not miss this show; its season is short and its message is beautiful.