Every Musical Ever: A Break-Neck History of Musical Theatre 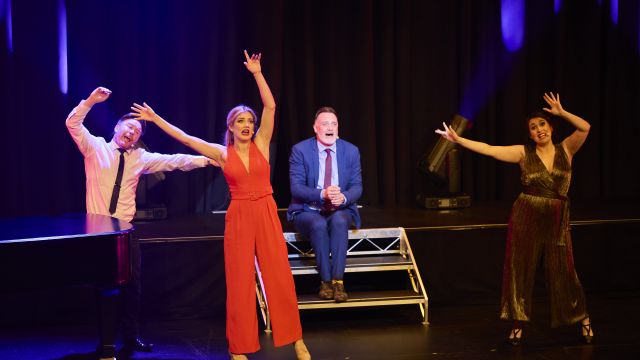 If you are a lover of musicals and want to take the miserable out of Les Misérables or put the broad back in Broadway, this is the show that does it! Sadly, this was a once only performance for the Cabaret Festival, but should it tour; it is 100 delightful musical and acting minutes, where 50+ musicals and sundry other songs, are performed at breakneck speed and with judicious lyrical re-arranging. Well, actually minus overtures, sundry verses and with superimposed lyrics that are often hysterically witty and most commonly irreverent. Seemingly, our superstar cast had invited two people from the Guinness Book of Records to time them as they attempt to cram the sum total of written musicals into the time. Now, we didn’t actually meet those time-keepers, but I am sure they were really there.

A show about musicals, of course, started with ‘There’s No Business Like Show Business’, and in meeting the five performers, it was immediately obvious that this show is blessed with some of the best musical multi-award winning performers in Australian theatre. Georgina Hopson, who had a ‘singing and acting ball,’ has recently starred as Christine Daaé in The Phantom of The Opera on Sydney Harbour. She is a musical powerhouse and when she demanded a solo spot, she explained that she had understudied several roles in the Julie Andrews directed season of My Fair Lady. Never having gone on in these roles, she proceeded to sing all four characters, in different voices in one song. Moreover, she excels at comedy and what is made to look like home-made choreography.

NIDA trained New Zealander, and leading Broadway and London stage performer Hayden Tee is known professionally for singing both the roles of Marius and Javert in Les Misérables. He is also an acclaimed make-up designer and artist. His glorious tenor voice is like warm honey, and as the lynchpin narrator he is witty and funny, particularly (spoiler alert) as a somewhat thumping version of Dorothy in The Wizard of Oz.

Josie Lane has a compelling and very individual voice. She also is a ‘ham’ of monumental proportions whose ‘contract guaranteed’ solo spot was milked for every nuance and audience belly laugh possible. Having performed many significant theatre roles, she is sublimely comfortable with her audience. Dash Kruck is a consummate ensemble performer. He describes himself as a short, sometimes funny, sometimes hungry, actor, but he is, in fact, an award winning Australian actor with a wide range of experience that includes musical theatre, television, film, cabaret and theatre. Recently Director of the touring show Friends, he has an instinctive flair for using the stage in a way that shines a light on others, whilst never diminishing his own talent.

A little imagination was needed when talented pianist, vocalist and MD Sarah Stenton was introduced as “The Adelaide Symphony Orchestra”, but in truth, her work in the ensemble, and on the grand piano was skillful, memorable and perfectly paced. Her ability to accompany two different songs at once was enviable and she is clearly much more than an accompanist. Perhaps the ASO should be a little nervous about her breadth of musical versatility.

Song after song morphed and segued and to name a few, we were treated to Wizard of Oz, West Side Story (and then they decided to do ‘mash ups’ to save time), Lion King, Fiddler On The Roof, Little Mermaid and Grease. There was not a dry eye (from laughter) when the Miss Saigon song was delivered at machine gun pace (pun intended), accompanied by a spot lit toy helicopter, elegantly suspended from a fishing rod! All of these were delivered before the 25 minute mark. For a change of pace, an excited audience member joined them on stage to choose place names for songs and they rattled through and parodied places including Rio where Peter Allen, aka Krucks got an Hawaiian shirt resplendent outing.

In all, 52 songs from musicals were crammed in and as Brad in The Rocky Horror Show would say, “Damn it Janet”, they failed the time test and the Guinness adjudicators tragically left with the record still not broken. But our brave cast finally faced the real truth, that musical theatre is not just about saving time and money, it is about entertaining people who love the songs and music. Unsurprisingly, these five extraordinary performers received a standing ovation, because we did love this zany, clever and brilliantly written and performed pot pourri.