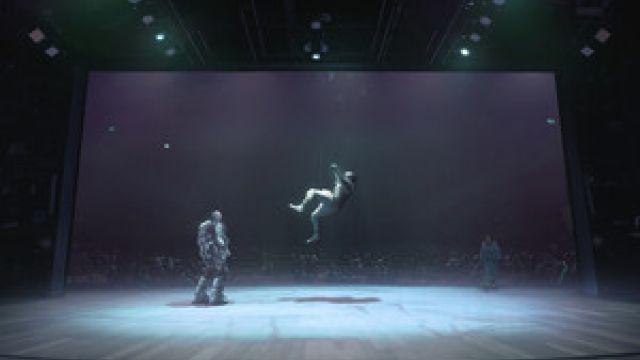 This stark play wakes three of the crew onboard a spaceship travelling to Planet X, to restart the human race after it’s destroyed Earth. None of them know the others and no one really understands why they’ve been woken. The only thing they seem to have in common is that they have all been dreaming in their induced sleep: stories of times past from their respective cultures, events demonstrating humanity and selflessness.

Tam (writer and director Angeline Andrews) is an anxious doctor and mother, pained both by what she’s left behind on Earth and the information from the self-aware artificial intelligence of the ship’s computer (impassively voiced by Jordan Wellard).

Jun (Alfred Ong) is the first mystery: who is he really? What is his role? Ong has a great balance of calm and sinister, polite yet stiff – a culture opposite to that of Will (David Halgren), who is gregarious, modest and levelling. Halgren’s reveal of his part in the story is the most accomplished here and his larrikin humour is welcome in the otherwise serious tale.

The sterile stage of an imagined spaceship control room is juxtaposed with rudimental images and narrative projected to a screen behind them. These dream sequences give historical context and contrast but could be more show and less tell.

It’s great that the story doesn’t stay long in its familiar space-mystery beginnings and the interactions of the three peel back the protective layers of their purpose to show us their humanity. Each of them takes turns in guiding the narrative to its conclusion, the steady pace having only a few bumps. The foreshadowing of its twists is subtle enough most of the time, yet there’s still a few rough edges to polish.

This cautionary tale provokes conversation on the climate emergency, asking plenty of questions and challenging the roles of our cultural histories in our future decisions.