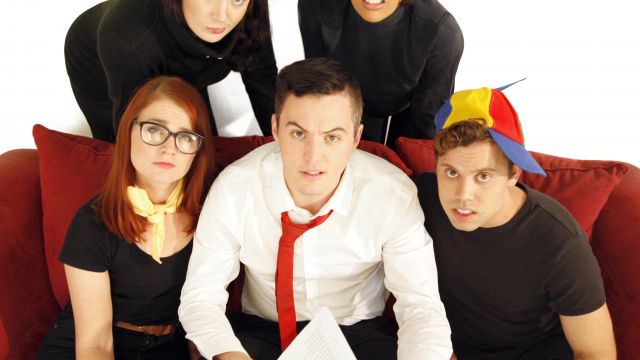 Charlie Franklin is very proud that he has written and directed his own musical, but the day before the show will open, he finds himself having lost most of his cast and half the orchestra. Can the show go on? Of course it can.

As Charlie (a vibrant performance by Andrew Gould) is forced to take over the lead male role, his loyal friends band together to cover the rest of the characters. Great performances from Tyler Jones, Erin Hutchinson, Taryn Ryan and Ann-Marie Biagioni as the cast who valiantly strive to keep this bizarre little musical, complete with man-eating bill-boards afloat. Manic performances, clever character switching and some lovely roadblocks in this sweet locally written musical.

Originally conceived as a high school musical with a cast of forty, the redevelopment as a one-hour comedy is self-aware, highly camp and very funny. With a clever book by Tyler Jacob Jones, it features music and lyrics by Steve Robinson. The ostensibly ‘reduced’ band was ably filled by Michael Biagioni, Robyn Blann, Keith Robinson, Steve Robinson and Serena Tsen.

The cast kept their energy high and the show moving at a cracking pace, despite sweating up a storm in a very hot spiegeltent matinee.

A fun show for kids, with just as many ‘float over the head’ jokes for grownups, this show is a fun family treat.