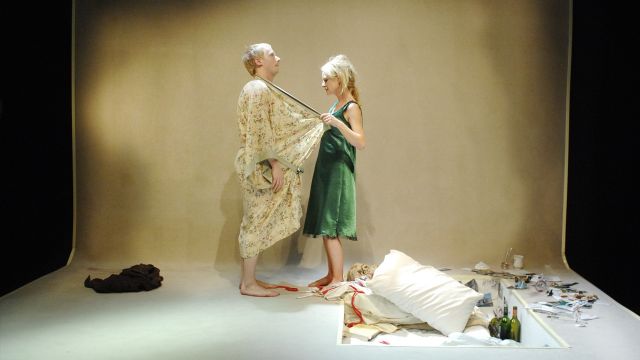 That Face takes a small slice of life and turns it into an entire world.
Mia (Lauren Henderson) and Izzy (Lucy Honigman) torture Alice (Fantine Banulski) in a high school initiation that goes wrong. Mia gives Alice Valium because she knows how cruel Izzy can be. The overdose almost sends the girl into a coma. Suspended, Mia returns home and we see why she'd drug a 12-year-old. Her brother Henry (Tim Potter) cares for their mother, Martha (Sarah Sutherland), in an altogether inappropriate way. For example, they get drunk together and sleep with their arms wrapped around each other. Mia's mistake forces her father, Hugh (Dion Mills), to come and clean up her–and his own–mess.
Potter and Sutherland's impassioned performances create a creepily-believable messed-up mother-son relationship that raises the ghost of Oedipus. Two-thirds of the play builds up to Hugh's appearance. Only an excellent actor can deliver on such promise, which Mills does.
Red Stitch Actors Theatre has a signature acting style. This is the third production of theirs that I've seen. Each time, they've crammed over-sized characters onto an undersized stage, creating an intimacy that draws you into the story's world. While you travel with them, you're willing to ignore rules of time and space.
In 16 years of reviewing theatre, I can say Red Stitch is Melbourne's best-kept stage secret.
Daniel G Taylor