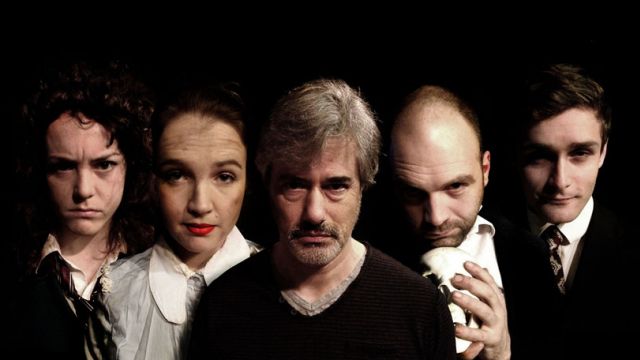 This paradoxically ambiguous yet insightful play is simply presented, with the clarity and confidence one would expect from capable and discerning Director Rob Reid.

Stripped back to its bare bones, Falling Petals is a story that highlights the perceptions and behaviors of three teenagers, two of whom; the sharp and determined Phil (Tom Molyneux) and the mean and somewhat calculating Tania (Freya Pragt) are under the hammer to do well at school in order to escape the small country town they grew up in.  By contrast, the other, Sally (Susannah Firth) is happy to stay put, feeling she has a satisfactory future. Over-shadowing these rather brutal and seemingly compassionless kids is some sort of creeping plague-like lurgy that is slowly infecting the children of the village and ultimately killing them.  This work combines naturalism with a simple application of magic realism in the use of petals to symbolically represent the fallen children. In turn its metaphorical symbolism could be open to other interpretations of meaning, such as the stifling grip of small town culture consuming and therefore limiting and constraining its children and potential.

As with 5pounds Repertory Season so far, all the performers are strong, engaging and convincing in their roles.  There is a clear sense they have an awareness of the subtext and subtleties in the work, but as would be expected on first night after one week of rehearsing, not everything has quite come to the fore.

Tom Molyneux, who was delightfully funny in Pygmalion and Sally, is most particularly displaying the capacity to portray a convincingly naturalistic character by contrast.

As I watched Falling Petals I was reminded of Declan Greene’s play Moth in that both texts deal with the depth and intensity of teen angst and self -expression. Both highlight vulnerabilities exposed in working through the tumultuous time of change and self-actualization in relation to circumstances and environment that adolescence can be and often is.

Well worth catching tonight or tomorrow night, if you can.  After all it is just a train ride to Richmond Station.