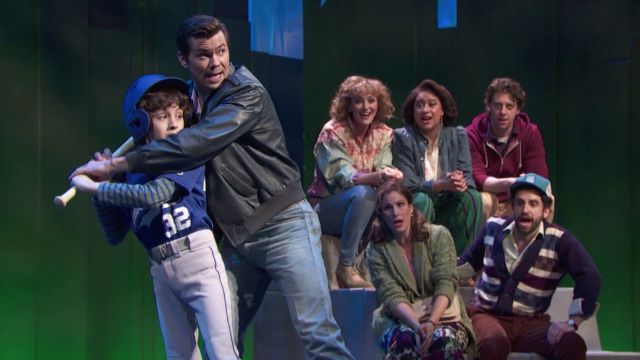 With Pride month being celebrated around the globe, it seems entirely appropriate that Lincoln Center should live stream their 2016 revival of Falsettos. Based on a trilogy of musicals about a married man, his family, and his gay lover in the age of AIDS: In Trousers debuted in 1979, followed by March of the Falsettos (1981) and Falsettoland (1990). The latter two became the basis of Falsettos which played Broadway in 1992.

An absolute ‘A’ list cast bring William Finn and James Lapine’s quirky sung-through musical to life. Act One (March of the Falsettos) is set in 1979, and follows Marvin (Christian Borle), a self-obsessed 30-something Jew who has just divorced his wife, Trina (Stephanie J. Block), left their 10-year-old son, Jason (Anthony Rosenthal), to jump into bed with pretty party-boy lover Whizzer (Andrew Rannells). Trina immediately seeks counseling from the family shrink, Mendel (Brandon Uranowitz), and to Marvin’s dismay, falls in love with him.

Act Two takes place two years later, the dawn of the AIDS crisis, but the word is never mentioned only implied when their lesbian neighbour Dr. Charlotte (Tracie Thoms) sings “Something Bad is Happening” (“Batchelors arrive, sick and frightened/They leave weeks later, unenlightened”) which was a pretty daring lyric to sing at the time.

Jason refuses to have a Bar Mitzvah, which Marvin and Trina want more than their kid, but eventually agrees to have it in Whizzer’s hospital room when he is dying.

This is a hard show to love. The characters are all obnoxiously self-obsessed. The kid calls his father a prick, the shrink not only sleeps with but marries his patient, and the central character hits his wife and infects her with syphilis and hepatitis. But this super cast makes it work and most of all makes us care.

Borle, whom we usually see in comedy, shows an astute understanding of the dark side of the man/boy Marvin, negotiates the contradictory traits of his character in Act One, and ends up giving him some (just a little) warmth. His final duet, “What Would I Do”, with Whizzer is tender and enlightened. Rannells’ Whizzer is all warmth, which is as he should be in the plot, and provides some depth to the pretty-boy image he portrays. He’s especially moving in his ultimate farewell song, “You Gotta Die Sometime.”

Bock is a powerhouse as Trina, and stops the show with “I’m Breaking Down”, sung while she prepares a banana and carrot surprise. Uranowitz works well as everybody’s confidante, but is particularly good with Rosenthal, who gives a remarkable debut performance as the nice but not-too-sweet Jason.

There’s lots of comedy but it would be hard to top “The Baseball Game” (“We’re watching Jewish boys who cannot play baseball play baseball”).

The foam cubed set conjures up a kids’ playground (appropriate for the man/babies of the piece), and Liff’s choreography lifts the work when it becomes too housebound. At 2 hours and 20 minutes it’s a long show, but worth watching if only for Block’s “I’m Breaking Down”, the true definition of a showstopper.