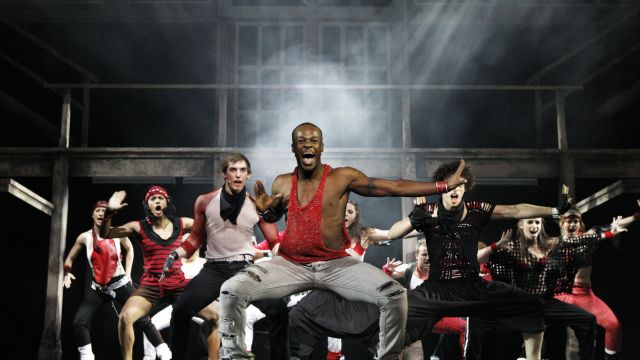 The musical based on a TV show based on a movie has hit Melbourne. Following a “Seasons of Love”-style opening, the audience is introduced to a stage-width LED curtain backdrop that is used to change the time and location of the on-stage action. All cast and creatives should be congratulated on a sterling effort, considering they are running on only four weeks of rehearsal and four days in the theatre (including two previews).
Vocally, every lead was impressive, but the evening’s highlight has to go to Jaz Flowers, whose rendition of “Mabel’s Prayer” was the most amazing performance of the night. There were some diction concerns in chorus items but I have it on good authority that this was a sound issue and not the performers themselves. The choreography stole the show (as was to be expected); the cast threw themselves into Kelley Abbey’s energetic and exciting routines and pulled them off with limitless energy.
Abbey’s extensive experience with FAME as both performer and director was a blessing for the audience as she deftly tackled the show’s clunky book. Her tight direction saved the show from falling in a heap between songs.
The two visual highlights of the performance were the “Argentine Tango” opening to Act 2, and Timomatic’s dance solo mirrored by three floating LCD panels. The cast couldn’t convince the audience to clap along to the finale tonight, but now that the rushed opening is over, everyone can settle in and tighten an already slick performance.
Ian Nisbet