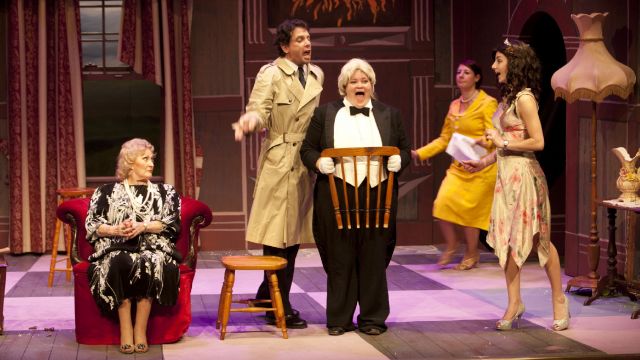 With an impressive cast, excellent direction and a wildly funny play, 1812 has started its new season with a fabulous production that even outdoes its last offering of 2012 – The 39 Steps.

Structured as a play-within-a-play, “Farndale” introduces us to the Ladies of the housing estate as they put on their annual murder mystery. Not only is there murder and mayhem, but the botched set keeps falling down, cues are missed and one character cuts five pages from the play, resulting in “poor dead Auntie Joan” coming downstairs very much alive. It’s all very silly but deliciously funny. There’s even a quiz and a fashion parade! In lesser hands this might have been a disaster. I’ve seen some community theatre farces of late which moved slowly and without many laughs.

However, this production is a triumph from beginning to end, and full marks must go to Director Tanya Ryder-Barnes for keeping the action moving, being surprisingly original with “sight gags” and understanding the nature of farce. She’s done an outstanding job. 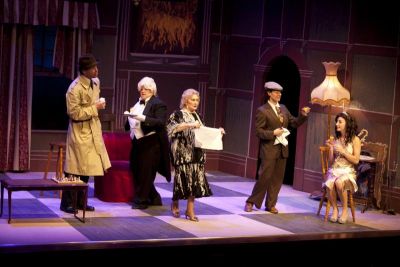 Of course she couldn’t have done it without a super talented cast and these are some of the best performances I’ve seen in a long time. Tina Bono gives us five delightfully different characters but truly shines as Mrs Reece, the Guild chairman (where she shows a great ability to adlib with the audience) and as an OTT saucy French maid. She’s a sheer delight every time she takes the stage. Patricia McCracken as Audrey….plus all her characters within the play….shows that things do get better with age. She uses her wonderful comic timing and nuances to full advantage and makes the most of every laugh. Small wonder she has a mantelpiece full of awards. Brett Hyland as the hapless stage manager Gordon is a gift to any community theatre. His interpretation of the Inspector, complete with speech impediment, is a comic delight. Imogen Martin is a threat to Rebel Wilson and capitalises on all the sight gags with relish. Dhania McKechnie gives Thelma – the reigning Miss Farndale… the right degree of vanity and is charmingly funny within the play…..(that is within the play, if you follow me). The lighting, sound, and set (especially when all going horribly wrong) were excellent throughout.

I haven’t laughed this much in many years. Together with my old performing partner who accompanied me, we’ve spent some eighty years doing comedy. We’re hard to please. And yet we were almost sliding off the seats with laughter. I just hope this production isn’t too early in the year for judges to remember when the theatre awards come around, because it deserves to be honoured. 1812 Theatre has excelled itself with this absolute corker of a side-splitting play. You really must see it.