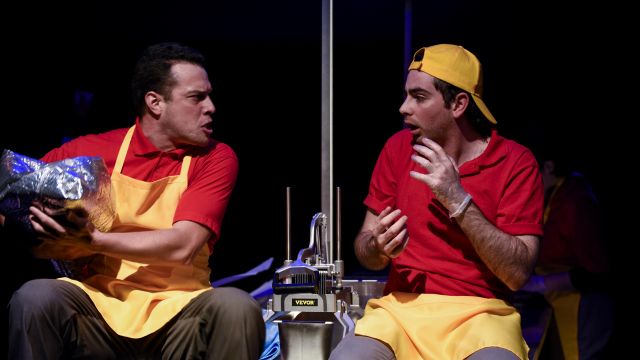 In a minor outlet of a fast-food franchise, career manager Troy (Kevin Hofbauer) tries to enthuse, motivate, and control his mostly disaffected crew as they set up for the day.

There’s G (Isha Menon), hardly a dedicated employee, but cheerful and anyway, she can’t think of something she’d rather do - yet.  Leonard (Casey Filips), student nurse, knows the ropes but is a distant, hung-over do-the-minimum guy.  River (Chi Nguyen), bossy assistant manager, has aspirations as a pianist – and is preoccupied with an upcoming audition.  And then there’s Rosemary (Ella Caldwell), newly divorced, middle-aged, an unusual presence in a fast-food joint – and rather in awe of these youngsters - but she needs the money.  This good mix of characters is quickly and clearly established by a very able cast who avoid that trap of ‘hey, we’re in a comedy!’ 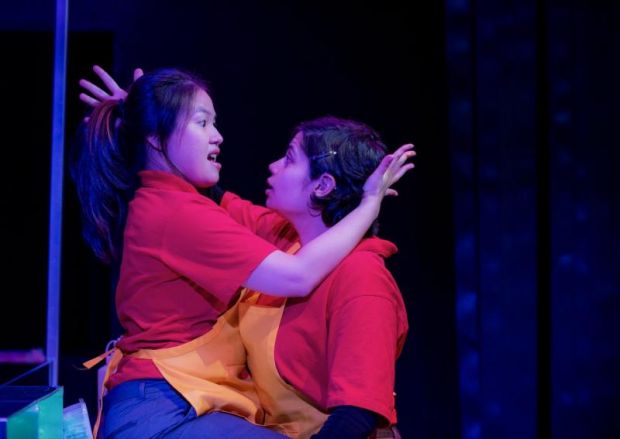 It is a comedy, of course, but Morgan Rose’s target is the gig economy: the exploitation of a casualised primarily young workforce doing the kind of work that can be soul-destroying.  But if you can learn the routines, and they become automatic, you can escape into daydreams or a world of fantasy.  And that, essentially is the subject of Fast Food.  As a premise it has great potential: to explore the zeitgeist via contemporary fantasies; to dramatize how much of ourselves is necessarily supressed in the workplace; and to point up the need for fantasy in such a soulless environment.

After a relatively naturalistic set-up here, there’s a stylistic shift: we realise that G has broken the fourth wall and she’s talking to us.  That signals a shift in style as the characters slip into their fantasies and there’s a stark  - and funny - contrast between their ‘normal’ workaday personas and their fantasy selves. 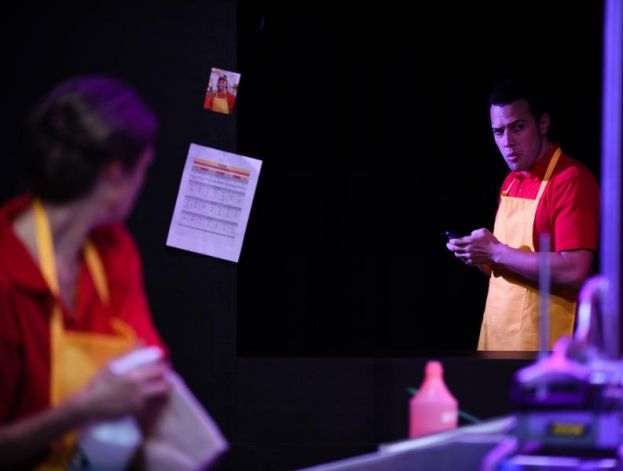 Uptight, unsmiling River, for example, is all raging libido with the hots for G…  An obsession with My Little Pony emerges from Rosemary’s childhood; she’s even brought a little pink horse in with her – and her workmates suddenly have hooves and pink manes.  Surly Leonard slips into his delightfully cliché but very detailed fantasy with a glazed, blissful smile: it’s of ‘a beach house’ where everything is perfect from breakfast to the weather to his companions…

So far, yes, we’re with it, we’re carried along.  But then Fast Food segues into the totally surreal and this beach house fantasy takes over the play.  It becomes a group fantasy gripping all the characters.  At this point, for me, the play essentially runs out of story, even while it keeps going and going… Until, after much tedious (it feels far longer than it is) and almost incomprehensible silliness, some sanity breaks through.  The characters reluctantly discover some small but undeniable positives in their situation – while the playwright appears to be in search of a way to wrap it all up. 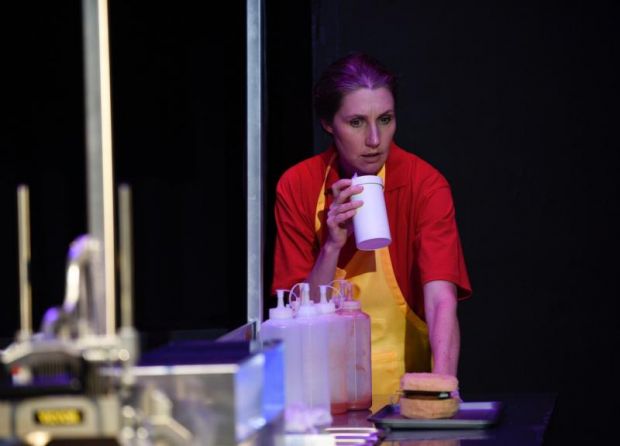 It’s hard to believe that Morgan Rose wrote the excellent, very funny but touching, restrained desert 6.29 pm (also at Red Stitch) and that Bridget Balodis, the director here, directed it so beautifully.

In her program note, Morgan Ross thanks myriad people for their help in developing Fast Food over many years.  Perhaps that’s part of the problem.  Too many voices in the mix?  Too much helpful advice?  Too many instances of ‘wouldn’t it be funny if…’  (E.g., ‘Wouldn’t it be funny if everyone had a plastic shark?’)  Is this an idea and a set of characters stretched too far?  In the end, sadly, story and structure let down the characters and the actors playing them, and we’re left disappointed.