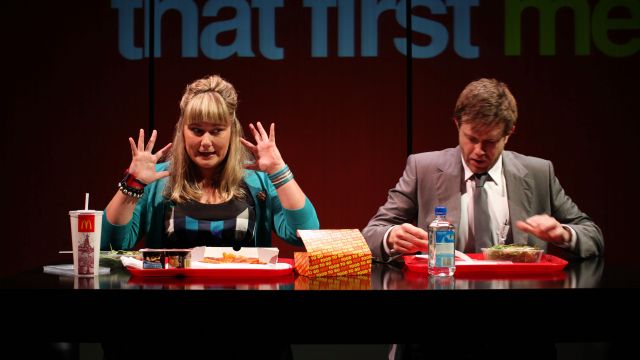 This play seduced me despite my reservations about the title. I am over political correctness and our obsession with body image. The title offended me.
Jibes about the overweight character were there, derogatory and vicious, but directed mostly to the likeable young man who was attracted to her.
Fat Pig is actually a brilliant examination of real situations involving real people. Brilliant writing, Mr laBute!
Helen, the plump girl of the title (played joyously by Amy Ingram) turned out to be the best adjusted character of all four in this scenario. She easily won the hearts of the predominantly plump female audience, and deservedly so.
Paige Gardiner as Jeanne, a generation-Y dominant character of the office and friend of Tom (Christopher Sommers) who is now dating Helen, got the biggest laughs and the most vocal support from the audience.
My personal favourite was Steven Rooke who played the good-looking but wicked Carter, Tom’s nemesis and best mate: great body language, an infectious taunting laugh and eyes that sparkled with mischief.
Director Morgan Dowsett and designers Renee Mulder (set), Ben Hughes (lighting) and Ian Rendell (projections and graphics) and all the technical operatives created an intimacy in Bille Brown Studio that appealed to the audience. At times their reactions resembled retaliation for manhate pent up from the mid-Seventies.
This provocative play has established four potential young stars. It deserves the packed houses it is attracting.
Jay McKee