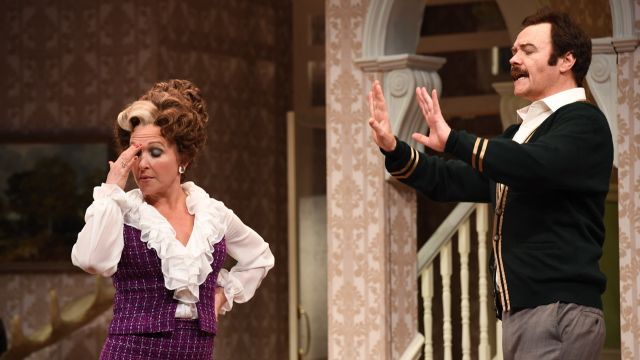 How great is this? I found it funnier than the TV show.

There is a generation who’ve never heard of Fawlty Towers (I pity them) so here is some background: Fawlty Towers is a British comedy TV series screened in 1975 and 1979. Consisting of only 12 episodes, it was created by Monty Python alumni John Cleese and set in a hotel of the same name. Basil Fawlty owns the hotel and is the show’s hapless anti-hero: rude and grumpy. His wife Sybil is domineering and keeps Basil in check. Polly the maid is the sensible smart nice one who often saves the day, and Manuel is the well-meaning but confused Spanish waiter –he’s from Barcelona- with a poor grasp of English.  Background fill over.

John Cleese has taken three episodes and re-worked them for the stage, giving us this, the official Live version. By “re-worked them for the stage” I don’t mean a lazy dumping of ad-verbatim TV scripts into three separate acts. One of the clever things about the stage version is how the three episodes have been woven seamlessly into one play over two Acts, so that the three plots run together cohesively (but Act 1 is dominated by the Salesman while the Germans don’t appear until Act 2). Instead of getting sitcom episodes we get a proper play in its own right that is a brilliant farce observing “a day in the life” of the hotel and its staff. Aficionados will spot the references to the other nine episodes sprinkled throughout. Many support characters from the series also appear (such as The Major and the elderly spinsters) and get their moment to shine. The unseen paperboy who re-arranged the letters of the hotel signage into naughty anagrams remains unseen but we spot his handiwork after interval. The musically astute will detect the fire alarm is much higher than a semitone from the burglar alarm (but I won’t tell you by how much). And while the moose head makes a star turn it is the rat that has the best cameo.

The show keeps its original setting of the 70s and Liz Ashcroft’s set and props are sumptuous. The clever insults and black humour remain intact. Today’s darlings from the PC Brigade will no doubt howl about the racism, misogyny, elitism, and cartoon violence in the script but they need to get a life. Besides, the show deals with the comedy of frustration and incompetence, so I think we all at one time could have reacted in similar ways as Basil does. As co-producer Louise Withers rightly pointed out: we need something like this show right now. The cast are perfect. For me the show was stolen by Deborah Kennedy -one of Australia’s grande dames of theatre- playing the demanding battle axe Mrs Richards, she of the dodgy hearing aid. She chewed the scenery (and the Cast) even when she was doing nothing but sitting in her room. On that point I’m glad one of my favourite lines from the TV show – the one about the piece of brain- was kept in.

The timing is exhilarating: The element of “bedroom farce” is perfectly realised, and if entries, exits, and pauses were Olympic events then this Cast and Director would be gold medallists. My only complaint is that I missed some of the lines because I was laughing so hard.

Make-Up, hair, and costuming ensure the cast resemble their TV counterparts, and it was great to see Blazey Best (Sybil), Aimee Horne (Polly), and Syd Brisbane (Manuel) be the character rather than resort to mere impersonation, and this gave their TV counterparts a fresh dimension.  Being the first version on stage I’d imagine there’d be strong expectation from the audience that this show stays faithful to what was on TV. In that respect I think the cast did a massive job to avoid impersonation and find their own way to breathe life into these characters. Yes, certain mannerisms and accents are of necessity present, but only because they go to character, not to copying. Nowhere is this more obvious than with Stephen Hall as Basil Fawlty. Stephen Hall really IS Basil Fawlty and without a trace of John Cleese. And rightly so. Nobody does a “Cleese Fawlty” better than John Cleese, and any actor so foolish as to play Fawlty as a Cleese clone should give up acting. Basil Fawlty is very much a three dimensional human character, and it’s a tribute to Hall that he makes us empathise with Basil even when Basil is at his rudest. If you want to see the difference between an impersonation and finding the essence of a character then watch Hall’s creation.

John Cleese gave the actor a well-deserved hug during the curtain call. I have it on good authority (Mr Cleese himself) that cast cover Andrew Johnston is just as excellent.

So does the show offer anything more than just a well-realised nostalgia-fest for ardent fans? Yes. Seeing this on stage makes you appreciate why Fawlty Towers has stood the test of time.

You’d be fawlty not to see it.