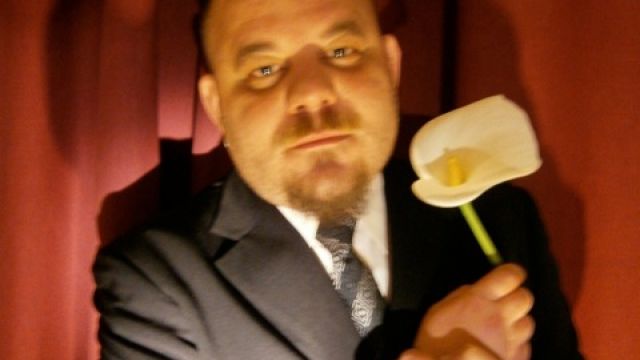 Eric Kuhlmann is a distinctive performer: a bear with a husky voice and a guitar, who writes original songs about his life.

In Red Light Songs of Lust, Love and Death, Kuhlmann sings mostly self-written original songs, with the occasional cover (such as Tina Turner’s “Private Dancer”) when it suits.

A vignette introduces each song, starting in his last year at high school where he lusted after a classmate and a teacher and carrying on through to the death of two his “family” in the space of a week.

The humor and content is captured in song titles like, “I’d be a Girl For Him” and “Older Guys Do It Better”.

Feast’s tech heads continue to be plagued with problems, but at least they got them sorted this time early in the show. Kuhlmann ignored the techs as they came on to the stage to fix the sound and barreled on as if he was the only one on stage.

His songs are funny, he has wit and with that he will make you laugh till you cry, but toward the end, those tears will be for the tragedies of wasted lives – both which may have been saved.

It’s definitely an adults-only production. It peels back the taboos around sex, drugs, love and, of course, death. It’s unmissable.

In 2010, eight SA aboriginal gay and lesbians created a show of their coming out journeys – and then toured regional Australia.

Rather than repeating the show at Feast this year, this was instead a screening of a film of last year’s production.

From Kym Wanganeen’s show-opening Michael Jackson impersonation, which he followed up with by sitting and having a yarn about his life, to Deadly Daphne’s drag numbers, to touching mother-and-daughter team Violet and Claudine Buckskin’s play, this was a show that combines art forms.

What binds each of the stories together is the strength of people who have faced prejudice and homophobia and chosen to overcome.

The first of two standouts was the intelligent and witty Raymond Zada, whose approach to his story was a lecture complete with PowerPoint slides.

The second was Lizzie Hurrell, a gifted storyteller, who engaged people from the start by comparing herself to a wombat: “wombat by name, and wombat by nature.” While angry about injustice she remains calm.

It’s easy to draw comparisons to Daniel Clarke’s groundbreaking Feast theatre project of a decade ago, First Time Out, where a group of young guys shared their coming out stories.

In other words, it’s a fresh spin on an old idea, but it becomes something new and just as powerful. Great show!