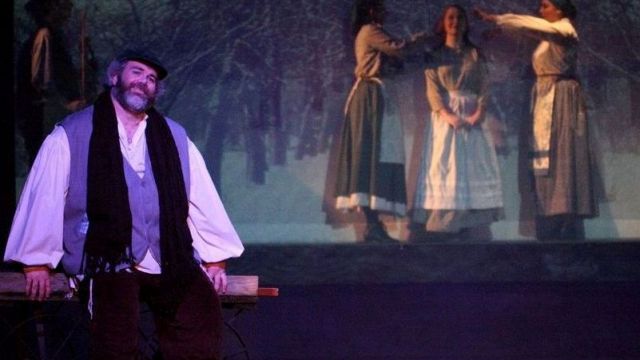 When director Don Gay suggested staging Fiddler on the Roof at the Playhouse Theatre, the Hobart Repertory Theatre Society board said the space was not large enough for the large cast. However, 31 cast members, and a full and changeable set representing various village scenes, did fit onto the stage. With over forty years in theatre, experienced director Don Gay extracted the most from the cast, providing great entertainment with the much loved musical. There was a small (miniscule) amount of uneven-ness in standard, as is to be expected for an amateur production, but not much, and overall, it was an excellent production. Some of the ensemble numbers were lovely, especially Sunrise, Sunset. The most notable thing about the production was that it was a totally acoustic sound. The director and technical crew were ready to add sound boost but decided, late in the rehearsal period, that, with breathing technique, they could have a better and more authentic sound.It was an excellent choice. There should be more of it. Another plus was the excellent diction, particularly from the principals. Mark Morgan and Karen Kluss as Tevye and Golde gave believable, charismatic performances. Belinda Tyrell, Evie Anderson and Rachel Mirk were confident and assured as Tevye’s elder daughters Tzeitel, Hodel and Chava. Martine Halliday and Paris Backhouse-Zooef, as the youngest daughters, were competent throughout. Congratulations to the cast for consistently maintaining the Russian-Jewish accents.

The play went for over 2½ hours, and although there were some moments that were a little slow, the action didn’t drag, mainly due to the ever-present nine-piece orchestra under the skilful musical direction of Amanda Harper. Choreographer Cassie Xintevelonis made good use of the athleticism of the energetic Cossack dancers, who in turn gave big dance moments in a very tight space. The set was effectively changed throughout, providing several scene changes suggesting interiors and exteriors of the village, with no disruption to the action. A thoroughly entertaining production!