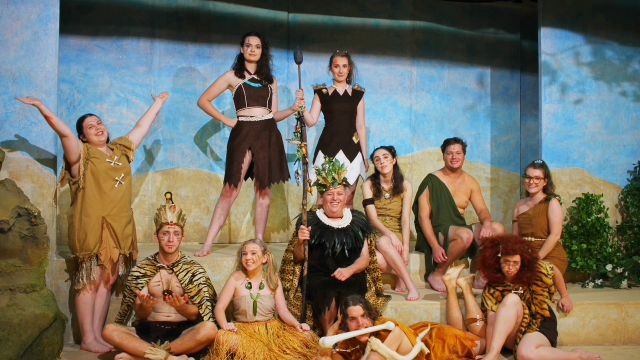 Firebringer deals with climate change but from a very different point of view. To quote the director’s notes, “Firebringer tackles the current climate crisis with an almost stupid, low-brow and idiotic humour” and as such may not appeal to everyone.

Set around the dawn of civilisation, the story is presented in a way that makes much use of a number of swear words (which were the creation of a more recent age).

This is an ensemble piece with a cast of 10, plus the occasional assistance of stage crew working the puppets. The set is basic and the ‘out of this world’ orchestra; under the direction of Rachel Love (actually in a nearby dressing room), are used to enhance the native atmosphere.

Director Mitch Walsh has chosen an unusual piece as his first venture into directing and does a great job in the use of his talented cast. Assistant director and choreographer Brooke Edwards, another “newbie”, recreated the ‘pre-historic’ antics of the cast to great effect.

So, if you like Pantomime for big kids, you’ll love this!