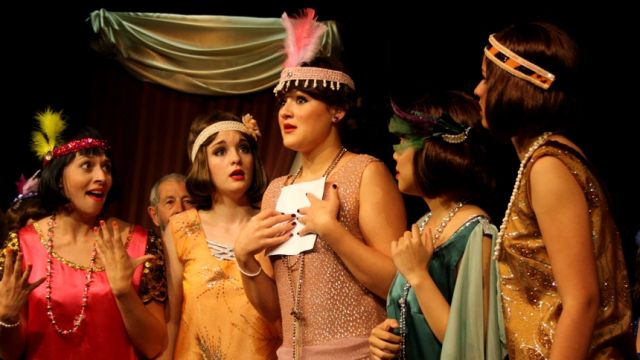 This musical is a hidden gem. It would be a wonderful choice for schools, with a predominantly youthful cast and lovely roles for young women. It was also a great choice for Stirling, with its active youth theatre.
The simple title immediately caught the attention of many in the community and Stirling was blessed with full houses throughout their run.
Costuming, under Fran Gordon’s care, was exquisite and with the help of lovely front of house displays, beautifully captured the era. Wigs (Bree Vreedenburgh) and hairstyles were outstanding.
Performances from the thirty-member cast were effervescent and bright. I particularly liked Jessica Van Wyk as Polly and her quartet of fiends (Samantha Vernon, Jessie Granger, Kirsty Procter and Belinda Wong). Bree Vreendenburgh was very strong and Trevor Preston appeared to be channeling Jim Backus in a strong characterisation. Celeste Underhill evoked ‘Velma Kelly’ as Mona while Cassie Vagliviello commanded every scene in which she appeared. Although I question cross-gender casting, Jessica Lee Williams was very watchable, while Chris Olive continues to grow into a very strong actor. Brendan Ellis delivered a lovely cameo as pole-sitter Lenny.
Director Peta Flanigan did justice to the period and the characters, and there were lovely theatrical allusions to well-known musicals of the era, although I would have liked to see more done with the choreography and sometimes the pace fluttered.
I enjoyed this bright and breezy musical.
Kimberley Shaw