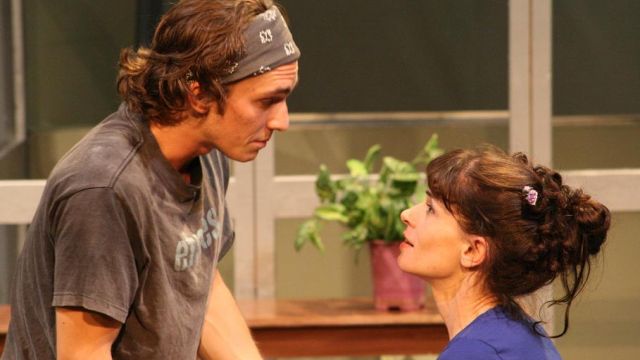 Girl meets boy. Girl concocts elaborate lie to seduce boy. Girl finds herself up to her ears in a drugs bust. Farce ensues. Canberra Rep is in top form with Flatspin, the second of Alan Ayckbourn's Damsels in Distress trilogy. Lainie Hart is feisty and vulnerable as daft, sexually frustrated, unemployed actress Rosie, Ross Walker is rather gorgeous as would-be love interest Sam, Jerry Hearn plays dapper boss Maurice as Jonathan Quayle Higgins III from Magnum PI, and Rob de Fries draws howls of laughter with his hysterical turn as Tommy, a dimwitted ex-army thick-neck. If on occasion the English accents drift a bit, the audience is having such a great time they barely notice.
The whole production feels well polished. The attention to detail shines, from the high-rise apartment showroom decor, the impeccable comic timing, to the subtle and clever lighting, which, you'll note if you can drag your eyes away from the action, moves from morning to late evening and includes lights from a disco boat passing on the Thames under the window. Geoffrey Borny’s direction is top-notch, with all the space used and a pace which doesn’t falter for a minute.
Ayckbourn has been turning out rom-coms since the mid-1950s at a rate of one or two a year, and it's fair to say that Flatspin is not exactly Shakespeare, but this production is smart, satisfying and a damn fine night’s entertainment.
Cathy Bannister