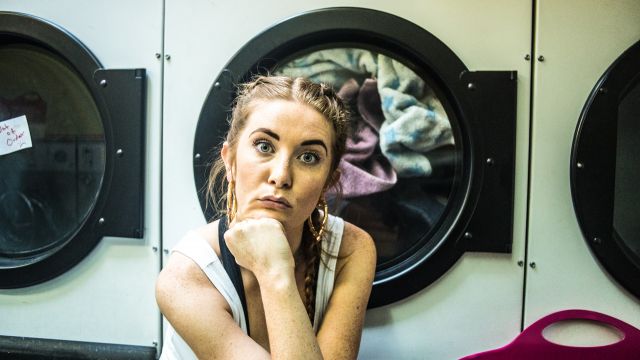 From the UK, Unpolished Theatre’s award-winning production of Elliot Warren’s Flesh and Bone is simply wonderful.

On a bare stage at Holden Street Theatre, the experience of modern life in an East London Council tower block is as often hilarious as it is poignant.

Over 70 minutes, and through a series of short scenes and monologues, five English working class characters – Terrence, Kel, Jamal, Reiss and Grandad – reveal their hopes and dreams, and ability to survive life’s hardships as members of the ‘lowest of the low’.

This is ‘raw’, energetic, inventive and exciting theatre. What makes this show so engaging is the physical energy, commitment and skills of the respective actors – Elliot Warren (Terrence), Olivia Brady (Kel), Alessandro Babalola (Jamal), Michael Jinks (Reiss), and Nick T Frost (Grandad). I have no idea whether or not these are ‘trained’ actors, however it would certainly seem so, judging by their exceptional vocal and physical, as well as acting skills, and range of dynamic expression. It would be worthwhile taking any young aspiring actor to this production to show what great skill and talent can achieve.

I should also add that not only has Elliot Warren written this dazzling work, but he also gives a terrific performance as Terrence and co-directs this production with Olivia Brady who plays Kel.

There are so many things to rave about in this production – the acting, the staging, the content, and the style. It is written in a heightened language, reminiscent of Steven Berkoff at his best. It is poetic, with numerous references to Shakespeare as well as contemporary London patois.

Particular monologues that stand out are Nick T Frost’s Grandad’s ‘Music Hall’ routine, and Alessandro Babalola’s Jamal’s monologue about being an intimidating ‘black’ drug dealer, whilst the reality behind the persona is a ‘little boy’ trying to care for his sick mother. Then there is the sheer hilarity in the scenes involving the invasion of rats in the council block, and the birth of Terrence’s and Kel’s baby girls, with audience members assisting in the birth.

One of the most poignant scenes is between Elliot Warren’s Terrence and his brother Reiss (Michal Jinks) in which Reiss confesses that he is ‘gay’. Then there is the final scene in which the characters are facing a forced eviction from the council block, and Terrence’s concluding monologue, which is essentially about survival and living in the present.

This show is, however, not for the ‘politically correct’ sensitive. For example, during the birth scene, whilst most of the audience was roaring with laughter, the woman next to me watched in shocked open-mouth disbelief, muttering to her companion as to how ‘disgusting’ she thought it. ‘Disgusting’? No – it was theatrically vibrant and funny, and the involvement of the audience members assisting in the birth was not only hilarious but also brought out the best in regards to generosity and sympathy from complete strangers.

The enthusiastic applause at the end of the performance was indicative of how thrilling and exciting Flesh and Bone is as a piece a theatre. The actors could have enjoyed numerous ‘curtain calls’, but time restraints unfortunately prohibit this from taking place.