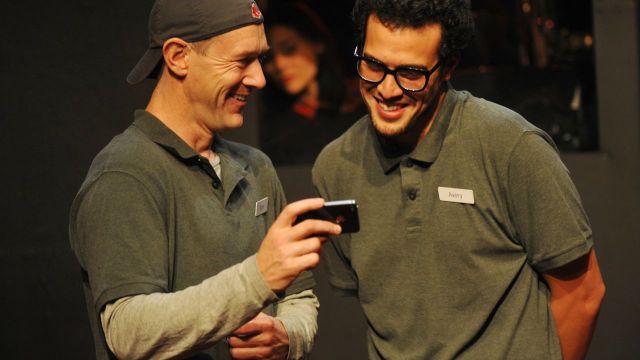 I find I look forward to Red Stitch productions more than to any other company in Melbourne, so I was disappointed to miss out on The Flick in its 2014 season. Fortunately it is back – with its original cast and creative team, and we’re all the better for it.

Annie Baker’s play about a run down cinema, barely surviving and about to ditch 35mm and go digital, is a revelation in a time when most new plays barely make the grade. This one is a modern classic with more than a nod to Chekhov. It takes three misfits who might normally be minor characters, and puts them in a frame, a screen if you will, encapsulating the human condition. Full of subtext and without exposition (what a nice change!) and long pauses that speak louder than any words, this is a play that perfectly encapsulates the necessary evils of story structure – Time, Manner, Place  - with deceptive simplicity, and is a metaphor for a world in decay, where what was once iconic is discarded in the quest for the almighty dollar. The audience becomes the screen, looking back into the empty cinema at the futility of lives going nowhere, full of major disappointments and minor triumphs, both of which are handled with the resignation of those expecting little from life. When the most exciting thing to happen in your day is a game of “Six Degrees of Kevin Bacon”, your expectations are bound to be low. It’s fitting that Nadia Tass should direct – much of her life has been movies, and her love for the medium shines through. Occasionally she lets her filmic eye overcome her theatrical one – the 20 second or so hold on Rose and Sam at the end of Act One is so filmic that one can almost feel the camera soft dollying in to an ECU on the two characters, capturing the changing flicker in the eyes. But the scene is, instead, static – and the focus on that one shot seems 5-10 seconds too long. On the other hand, one can FEEL the slow crawl of the end credits over the hapless Sam in the last scene of the play. The direction is both an homage to the power of film, and a refreshing change to theatre itself. If, on occasion, it doesn’t work quite as it should, well, nothing is perfect; and some of the best moments happen in silent mouthing in the upstage projection box, framed by its window. When it works, it is simply stunning.

Tass has a dream cast to play with. Ben Prendergast is Sam – a 35 year old going nowhere for whom the job (and the possibility of projectionist Rose loving him in return) is everything. Prendergast is such a charismatic actor that there are moments when you see him hunch the shoulders a little more, bow the head, work at hiding the charisma; but in Act 2 he is simply superb, generously sublimating his power as an actor and handing the stage to Dion Mills (always powerful in his own right) in a cameo role and to guest actor Kevin HofBauer, whose performance and journey from 20 year old privileged college kid through a loss of innocence, to a necessarily more cynical “Grown Up” is quite breathtaking. The play hinges on that journey to work and, in realising it so perfectly, the marrying of text, direction and acting touches each of us personally with the memory of adolescence, when all of life was a movie - and full of possibilities – only to remind us later that movies, like life, are an illusion and celluloid disintegrates with time, it’s up to each of us to find our own truth. Hofbauer is extremely exciting as an actor and it’s forgivable if his performance seems at times a little too large for the space.

Ngaire Dawn Fair is superb as the dysfunctional and lost Rose, seeking validation yet afraid to be loved. The sideways glances, the open flirtation, the protective body language, the flicker of thought before the cutting retort…all are quite marvellous. It’s a magic performance overall, in a production of great performances. David Parker’s lighting and Shaun Gorton’s set are, wisely, no more than functional – never pulling focus from the characters themselves. Russell Goldsmith and Daniel Nixon’s soundscape is almost religious in its tribute to the great sweeping musical scores of days gone by. And just when you think there really is no plot, Baker pulls one out of two tiny threads in Act one to deliver totally satisfying storytelling and a filmic 2nd act turning point and resolution…just masterful.

And there you have it. Four stunning performances beautifully directed in a superb play: could one ask for anything more from theatre?