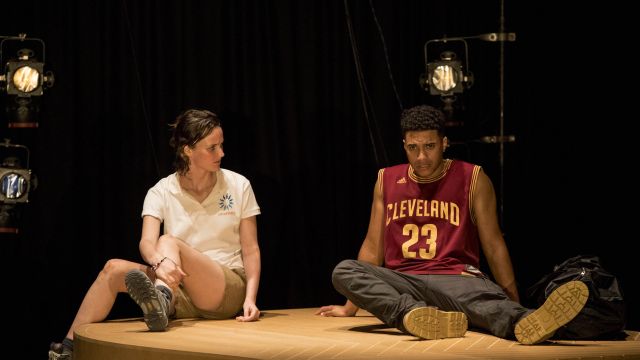 “This is a world where men and birds fall from the sky, where young women are judged by the colour of their skin and where power can be ordained by a line of succession … where most of the characters genuinely want to create a better, fairer world than the one they were born into.” (Anthea Williams, Director)

Williams and playwright Julian Larnach consolidate their Belvoir-based working relationship in this production than brings seven young actors together in this different take on the ‘coming-of-age’ theme. Its characters come from diverse backgrounds, have diverse aspirations, but are thwarted by the same “flawed system” – whether it be in an over-crowded slum of Kibera in Kenya, or the exclusive, ‘hallowed halls’ of Oxford University.

Larnach’s writing is economic, the dialogue effectively honed to suit the characters and the environment from which they come. In short, carefully edited scenes he explores complex themes that question both altruism and classism, and examine the realities of both. He creates clear, multi-dimensional characters who interconnect across cultural and social barriers, looking at global issues through the keen eyes of young people who want to change the world. His words are delivered crisply and clearly by talented young actors who have found compassion and empathy with the characters under Williams’ perceptive interpretation of the script. The pace she sets is fast, commensurate with the youth of the characters and the new tempo of their lives. Under her discerning direction they meet disparity, disappointment and disillusion with the underlying courage and optimism of youth.

The Lennox Theatre has been cleverly reconfigured to allow a closer relationship with the audience, more imaginative staging (Jeremy Allen) and creative lighting design (Verity Hampson). An arch of lights curve above the stage, glaringly African bright in some scenes, shimmering in others, especially effective in the final moments of the play as they flicker quickly to the sound of a flock of starlings whistling through the sky above (sound design by Michael Toisuta).

Luisa (“everyone calls me Lu”) and Emily are two young Australian women following a dream. Lu has arrived in Oxford on a scholarship but has yet to decide her major. Emily has flown to Kenya as a volunteer with an aid organisation to help build a school. Both are strong-willed, highly scrupled. Ebony Vagulans is convincingly gentle, yet staunchly down-to-earth as Luisa, determined to be true to herself despite being out of her comfort zone among the class-conscious, intellectual elite of Oxford, exemplified by Brandon McClelland who plays both Max and Tom, one representing the stuffy elitism of the Oxford collegiate, the other the political competitiveness that such an atmosphere breeds.

Monica Kumar is Anika, Luisa’s Orientation Week ‘buddy’, a graduate from a working-class family seeking the acceptance that the class system denies.

Airlie Dodds is righteous – and wearily vulnerable – as the disheartened Emily, working in the heat of Kenya under the supervision of Adhama, played by Richie Morris. Morris makes a strong theatrical debut, finding the tight self-control that covers the simmering bitterness and loneliness of this character. Aileen Huynh balances the tension they create as the more realistic, less-scrupled, fun-loving Charlie.

This is another moving, thought-provoking production under the auspices of NTofP’s commitment to “reflect today’s Australia and its diverse population” – and just one of the many 2018 productions that will come to Riverside as it celebrates of thirty years of bringing an eclectic range of theatrical arts to western Sydney.