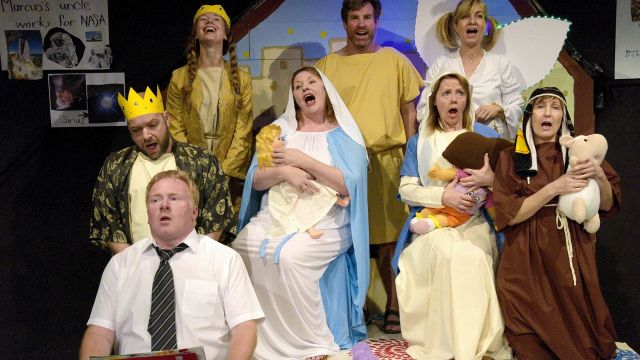 The ins and outs of worldwide politics are fraught with power plays, back stabbing, bullying and ‘interesting’ interpretation of facts. The fraught characters within the political world include ambitious top dogs and repressed underdogs, together with hard workers and the not so inclined. Tim Firth’s delightfully funny comedy The Flint Street Nativity demonstrates that even among seven- year-olds in any junior school, ‘political’ power play and even similar characters are also present. However, with youngsters, there’s an important exception -children have unconscious, innocent insights into adult behaviour that are probably beyond the capacity of most grownups…including politicians.

Red Phoenix Theatre’s premiere production of Tim Firth’s play is both hilarious fun and a poignant window into the world of one school’s seven-year-olds at Christmas, where each child’s investment of private hopes, wishes and dreams into the staging of a Christmas Nativity play comes up against peer pressures and differences, teacher discipline and parental idiosyncrasies.

The Nativity play is a familiar scenario in many cultures. Director Michael Eustice has taken that premise and used it to bestow Tim Firth’s English play with a distinctly Australian flavour, even down to specific local references, such as a child obsessed with the Hot Seat television game show.  The success of this adapted setting is up to the individual theatregoer to judge; I didn’t mind it.

For Red Phoenix’s cheerfully costumed production, the nativity action takes place in a schoolroom with a small dais, on which a stick insect in a glass tank is displayed. On the walls, small, cute and colourful paintings of Christmas scenes are displayed, the exception being one of a duck with an ice cream, painted by the child whose family, for religious reasons, does not celebrate the season. There is an information sheet about the rare creature, Bibron’s Toadlet. On the back wall a ‘gold star’ chart clearly shows who has been naughty or nice and who has insisted by writing on the chart, that despite contrary evidence, gold star behavior has prevailed in his case.

Teacher, ‘Mizzus’ Horrocks’  seven-year-olds are played by adults and she, while not actually seen, is perhaps exactly what some children may perceive of a stressed out teacher…a bossy, intrusive buzz of sound that means, whenever present, they must stop and listen while busily trying to find their niche in the world of school. 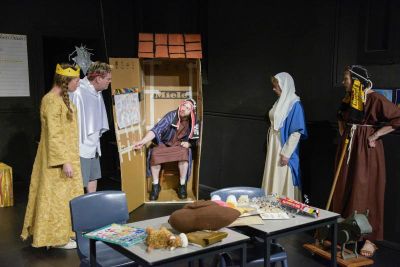 The adult actors in this production all draw on their ‘inner child’ to produce wonderful characterisations of the actual child each portrays, as well as the Nativity character required for that child to represent. Of course the Nativity scene goes hilariously wrong as sporadic chaos ensues.

Sharon Malujlo is simply brilliant as Zoe, whose Nativity title is Shepherd. In a rib-achingly funny portrayal, the innocent yet unselfconsciously honest and uninhibited behavior of an outgoing child shines through. In a highlight, Malujlo makes the most of Tim Firth’s hilarious text in Zoe’s graphic description to the others of birth among animals on her family’s farm. A standout performance.

Brendan Cooney is wonderful as Ryan, who plays both Herod and Joseph, but who is more taken up with the presence of his Dad in the audience. We have all chortled at cute ‘there’s Mum’ or ‘there’s Dad’ behavior on stage at school concerts, when a child stares and points into the audience and is oblivious of the action required of him or her on stage. Cooney has nailed it perfectly. This is also an excellent portrayal of a wide-eyed, emotionally neglected little boy for whom the rare attention of his father is more exciting than Christmas.

Tim Williams plays his own namesake, the nativity play’s sweet Narrator, seven-year-old Tim. The Narrator struggles with both his nativity lines and keeping order on stage. Williams gives a very fine portrayal of a child who also struggles with what’s happening at home, as this child’s parents are separated. A memorable and endearing characterisation.

Lyn Wilson and Tracey Walker are perfect foils for each other in their roles, with Wilson as the goody two shoes, multiple gold star-winning teacher’s pet Jenny (cast by ‘Missuz’ Horrocks in the sought after role of Mary in the Nativity). Walker is manipulating, bitchy Ashley, who is Angel Gabriel but is desperate to play Mary and who is actually desperately unhappy in her real life role as the sibling of a preferred older sister. Their scene together when two Marys appear on stage is hysterically funny, surpassed only by the scene in which Ashley dons garish red lipstick and uses a certain very personal adult female item as a pretend cigarette! My ribs ached.

Brant Eustice, as Marcus, who is the Star of Bethlehem, is terrific in the character’s manic and derisive disdain of the spiked depiction of a star he must wear when he is trying to impress the others with his Uncle Ted’s (Mum’s ‘friend’) work with real stars at NASA. When Marcus finally gets attention by upstaging the others in the Nativity, Eustice’s comic timing is superb. Eustice’s portrayal of an Ass is hampered a little when singing, as the ass’s head makes his words difficult to distinguish at times.

Anita Zamberlan Canala is gorgeous in her role as anxious to please Angela, of Italian parentage, who plays an Angel. Angela is constantly dealing with the conflictions that come from who she wants to be friends with and the children bossy Ashley tells her she can befriend. Canala’s own heritage helps in her very funny scene when Angela quotes from a heavily Italian- accented family discussion about a disliked Greek woman. 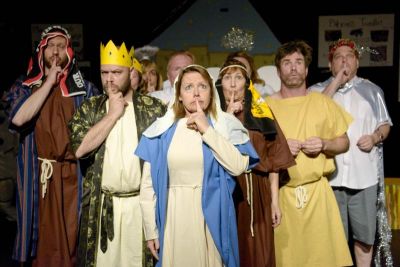 Cheryl Douglas is very good in her role as Jess, who plays Wise Gold, and even more telling in her depiction at the end of the play of Jess’s less than perfect mother. Derek Crawford is quite creepy as Bradley (the Innkeeper), the quite clearly disturbed brother of Zoe, while Nick Fagan gives a heartbreakingly honest and realistic performance as Adrian (Wise Frankincense), a child dealing with a crippling lisp.

When Tim Firth adapted his movie into this stage play he added songs, which are wonderfully sung with everyday voices; not as a trained singer might do, but just with honesty. It is in these songs that each child’s inner feelings really come across. Every song is a highlight.

The entrance of the parents at the end, played by the same actors, tends to dampen the joy of the Nativity play’s finale somewhat, but the playwright clearly thought it necessary. It certainly underscores the innocent perceptions of their children, but we have already seen much of the parents’ personas through their children’s eyes.

The Flint Street Nativity is a depiction of childhood power play… played out within a play… and all within another play. It reminds us, through humour and even raw honesty, of the influence adults have on young minds.

In Red Phoenix Theatre’s hands this poignant comedy is fun, festive and definitely food for thought for everyone. Don’t miss it.