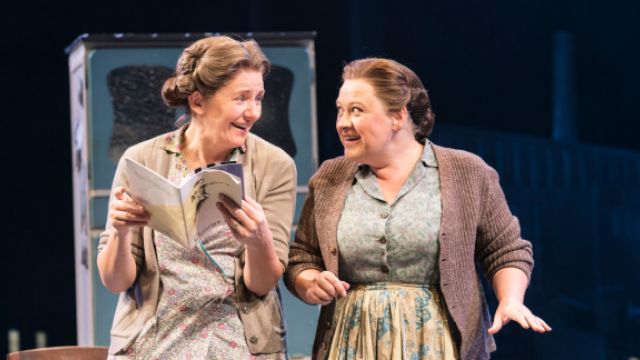 Flowers For Mrs Harris was first produced by Sheffield Theatres in May 2016, and directed by Daniel Evans. It won three UK Theatre Awards: Best Design (Lez Brotherson), Best Performer in a Musical (Clare Burt in the titular role) and Best Musical Production. This new production was again directed by Evans, with design by Brotherston, and Burt playing the eponymous char for Chichester Festival Theatre in 2018.

Based on the 1958 novella by Paul Gallico, set in a post-war coupons and rationed Britain, the story of a salt-of-the-earth London charlady, Ada Harris, finds her world transformed when she sees a client’s Dior evening gown and determines to own one like it. When Burt sinks to her knees and declares “I have to have one” in a sliver of light as she looks at it in religious ecstasy, it’s a moment that resonates with truth. In fact everything about Burt’s performance resonates with truth: it’s endearing, charming, and the total reason to watch this video. She’s superb.

The cast of ten principals do double duty playing Burt’s customers in the first act as she scrimps and saves from what meagre pennies she earns, and the Paris fashion house employees in the second where they sometimes speak and sing in French.

Joanna Riding’s Lady Dant seems more caricature that character, but her Madame Colbert had plenty of ‘haute-courtier’ style. Gary Wilmot is a bombastic wheelchair-bound Major, but is better as the suave Monsier Armande. Louis Maskell has appeal as the awkward Andre, likewise Laura Pitt-Pulford’s Natasha, who with Burt’s help lets her hair down. Acting honors are also deserved by Clare Machin as Burt’s fellow char and tea-making London confidante, Violet. As Burt’s dead husband Albert, Mark Meadows is loving and caring. Their tender first act duet “All I Ever Needed” has pathos.

A lot is achieved with Lez Brotherson’s minimalist set with its revolve and a sweeping staircase that visually comes to life when the models descend it displaying the courtier gowns.

Richard Taylor’s score is mostly of the wisp of a tune here, and the wisp of a tune there, variety with little melody that lingers in the mind, although what there is, is not unattractive. It’s an art-house musical and belongs in the She Loves Me basket. With its major character falling in love with a dress, it also bears similarities to Ladies In Black but with a better score. The vocals are excellent and the ten-piece accompaniment sounds lush.