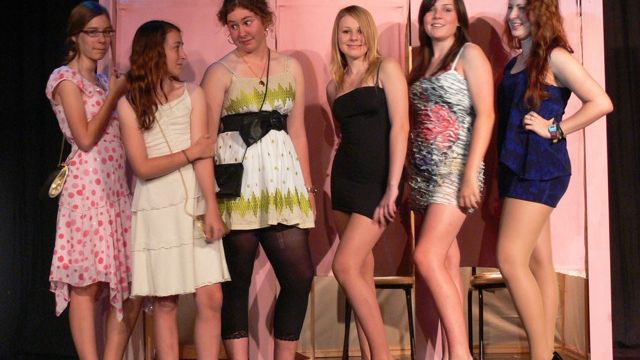 This play by Tara Adams is a good old romp about teenage insecurities. At a school dance Rebecca (Bridget Rawlins) has caught her boyfriend Josh (Joe Beaton) dancing with her best friend. The only place to hide while she vents her frustrations is the girl’s toilet, and that is where the action for Flush takes place. Coming into the toilet at various intervals are good-time girls Jen (Lydia Beaton), Katy (Kali Johnson) and Sarah (Ashleigh Short). The trio, wearing ludicrous high-heeled shoes and over-the-top makeup, were great entertainment. This, combined with their gossipy, rambling chatter, made these characters the comedy package of the play. All three actors played their parts superbly, giving the audience a good laugh at their antics. However, Jessica Whybird’s performance as Peta was the strongest performance in the play. Her timing and facial expressions were excellent. Bridget Rawlins was a suitably frustrated Rebecca, while Joe Beaton played the role of a confused Josh to perfection. Jade Collinson as Emma, the girl Josh dances with, gave a neat, controlled performance, as did Hannah Lydeamore as Carly, the insecure, gawky teenager.

The play was well directed by first-time director Shane Trevorrow, who got the best from her talented teenage cast.