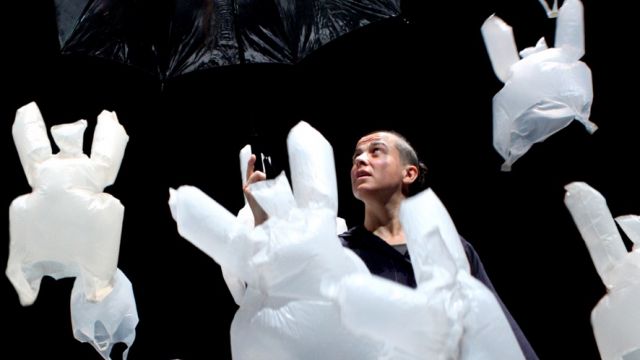 How do I review a performance that can’t be expressed adequately in words?

Foehn (or a warm Mediterranean breeze), is a 40-minute escape from reality into the world of Silvano Nogueira and his ‘puppets’, made of single use plastic bags. It is art meets recycling and then some.

On entering the performance space, one is struck by the almost religious stillness, dim lighting, a round stage circled by 18 electric fans and at the top of the stage, what appears to be a hooded monk with 2 plastic bags in front of him.

Slowly he removes some scissors from his robe and precedes to cut the bags. The silence is broken only by the ripping of sticky tape.

His creation finished, the fans start and a being is ‘born’ (inflated) and rises to dance in the air guided by Nogueira, the puppeteer.

Soon the being is joined by another and they perform their pas de deux, rising metres into the air. The master puppeteer calls them back to him and they sit on his arm like birds. There are eventually around 100 plastic bags-no strings, just the puppeteer, his costume and currents of air.

I won’t reveal the rest of the performance except to say the peace does not last, with the introduction of a golden snake and then the climactic ending which leaves the puppeteer engulfed!

What fascinated me the most was the consummate control of Nogueira over his beings. Moving slowly and silently he is the centre of the show and a constant ominous presence. He knows when to step back and let his beings dominate, yet is always ready to step in and be their master.

When I attended, at the conclusion of the performance the audience, young and old, rose to their feet in respect and appreciation.

Foehn is breathless, flawless and an artistic masterpiece!