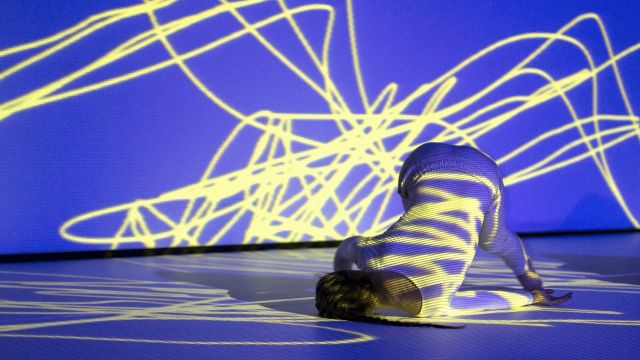 In this program two creative teams exemplify how contemporary dance reaches beyond story telling to social comment, and how the arts are being combined and juxtaposed in unusual and imaginative ways.

In Safe Hands Miranda Wheen makes a wry, satirical, across-the-board comment on competition – “Go for the win ... Team Australia … Choose a better future” – all of that and more. She begins dressed in a suit. A businessman? A politician? ‘He’ meets and greets, then, to Men at Work, strides, fast, confident, acknowledging success in exaggerated nightclub dance floor style thrusts and shakes, a ‘hero’ on a narcissistic journey to success.

A change of tempo and the suit is discarded to reveal an athlete, symbolically masked – another ‘hero’ on another stage. He/she limbers up, poses, struts, striving for perfection, for ‘gold’. Once again narcissism pervades! Is the message really about ‘the team’ – or the modern fixation on ‘me’?

Wheen is energetic, tightly controlled. She moves with consummate grace yet with amazing speed and agility whilst still getting across the humour of satire and irony contained within the choreography. 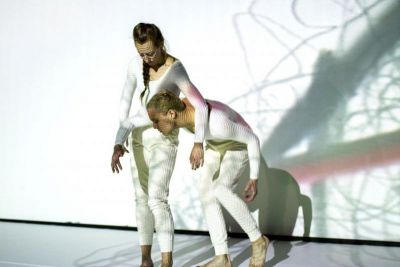 Wheen and Matt Cornell perform together in Between Two and Zero, a piece that looks at “the play and the real-time negotiation inherent in the attempt to dance with one another” – as in any partnership. Both dancers make the space their own, using speed and distance to show the complications of two entities, two wills, facing “rules, agreements, rhythms and set patterns”. They follow, chase, back off. They fight and struggle – and eventually move into seeming conciliation.

There is some very complex choreography in this performance. The space becomes almost a map of movement, concluding with a series of very carefully conceived and beautifully executed lifts by both dancers that are almost mesmerizing to watch.

In the interval the space is transformed to a white screen stage and backdrop for Sketch, a production from Flatline, “an interdisciplinary collective that converges multiple artforms”.

Choreographed by Carl Sciberras, this is a triptych where three dancers, a visual artist and a composer combine. Dressed in white on white, the dancers – Sciberras, Rosslyn Wythes and Katrina Olsen – react to the eerie notes created by Mitchell Mollison and are followed in lines on the screen by visual artist Todd Fuller. This is a strange coming together of movement and colour and sound that merges a little too chaotically at times, so that the dancers are almost lost in a confusion of lines and colours that dominate the stage and screen – and, unfortunately, the attention of the audience.

This is a very long piece, probably too long, superseding the initial ‘wow’ impact of the artistic effect that is, at first so impressive. There is just too much ‘merge’ and not quite enough differentiation in the last ten minutes so that the lines between the art forms are almost impossible to distinguish – and this, it seems, is the aim of the piece.