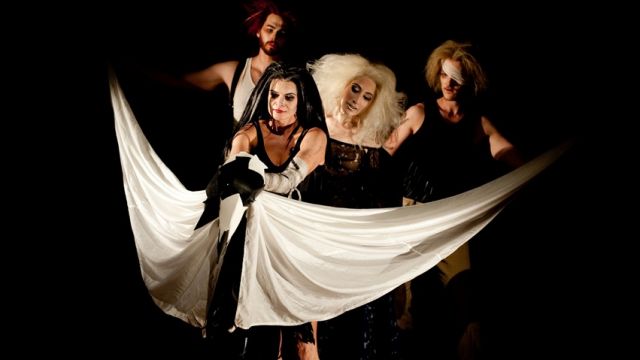 “Do you know what betrayal is? It’s when a friend does something that’s not very nice.”
As I took my seat at the Seymour Centre, the mother sitting next to me said this to her two young sons. She was telling them about part of the story we were about to see, Fox by Monkey Baa theatre.
The story follows three animals, Magpie, Dog and Fox, as they take us on their journey of friendship, betrayal and courage. Magpie is injured and Dog offers for her to ride on his back. When Fox enters we see the story unravel. This production, based on the book of the same name by award winning author Margaret Wild, has been adapted into an opera for young people directed by Kate Gaul.
Composer Daryl Wallis has put together what some have described as a ‘haunting’ score. It is haunting; it’s also eerie and somewhat enigmatic. Opera singer Sarah Jones, who plays the Spirit, has a superb voice and maintains it throughout the 55 minutes onstage. The opera narrative provides the audience with the story as the other three characters have no verbal dialogue or singing parts. As the Spirit is the only character who sings, I felt there was a level of disconnection between the audience and the other characters.
I love children’s theatre, the way it captures our imaginations and moves us. But this production lacked something for me. I felt the talented actors strengths were underutilised. I also felt that dancers could have been a more suitable choice for this type of movement-focused production. The three characters of Magpie, Dog and Fox do not use dialogue or singing, so a high proportion of their work is movement based. The choreography could have been more complex had the performers been professional dancers.
The operatic score for some scenes could have created some beautiful lyrical, contemporary or balletic choreography; there could have been some amazing pas de deux choreography and lift work. When Magpie rides on Dog and Fox’s back, there were some wonderful opportunities choreographically. Jay Gallagher as Fox, although his role seemed rather small, I felt he was the strongest most commanding performer of the three.
Some of the puppetry work was delightful; the use of the Magpie puppet and the white wings as they filled the air was a very effective, visually pleasing aspect of the production. The use of multi-media was effective and tied in well with the story line.
The message of friendship and loyalty is an important and relevant one for young children and I think introducing children to opera is to be commended. The more aspects of theatre children are exposed to, the more it opens up their ideas and thoughts around theatre.
Emma Bell