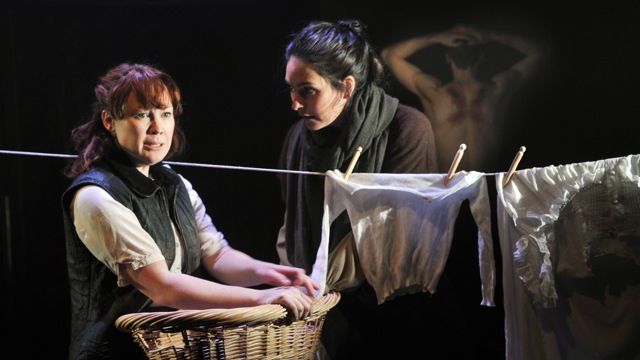 We expect Red Stitch, as a company, to confront us, push our boundaries, invade our comfort zones and, most importantly, present us with exciting theatre. Once again they do not disappoint.

Set in a world of the future, or an alternate dimension, Dawn King’s thought-provoking play presents a world gone mad within the rigid bounds of sanity. The weather is crazy, the crops are failing, farms are government regulated and punishment is rife. The blame is put squarely on the fox…a demonic creature responsible for killing livestock, stealing babies, and exercising mind control over hapless farmers. It’s easy to draw parallels between the Nazi condemnation of the Jews, The Spanish Inquisition, or even our own fear of the boat people. Zealots have an unswerving belief that they are right, and with that goes great power over the rest of us…those who are still searching for answers through their own uncertainty. When things go wrong, a scapegoat must be found, and its danger built up to mythic proportions in order to exercise control. Never mind that all indications are that the demonic fox is already extinct. 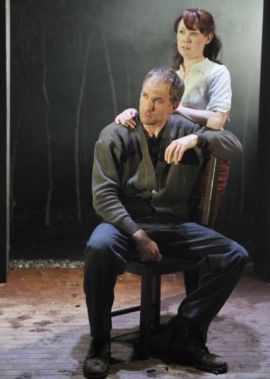 Sam and Judith Covey live on their run-down farm. They’ve had a bad year (loss of a child, bad weather, crop failure) and will not make their “quota” – thus the drones in the cities may starve. Into their lives comes the sinister William Bloor, an official “Foxfinder” who holds absolute power over their future. Though still only a boy, Bloor’s training has brainwashed him in a quest to rid the land of all evil, personified by the fox…even though he has never seen a fox, and doesn’t know anyone who has. When he declares the Covey’s farm contaminated, he exercises total control over the couple. His quasi religious self-flagellation, his abhorrence of any human touch, his sociopathic lack of empathy all signal to us that, when he starts to doubt, it is not just his world which will come crashing down.

I rarely single out a set as “star” of a show – but this time I have to. I always react with awe to what resident designer Peter Mumford manages to do in the tiny performing space that Red Stitch has. This set is a black box with an upstage opening, (the land outside the farmhouse) some silver birch trees and RAIN. Yes, rain for at least ¾ of the 90 minute running time. It is the most phenomenal rain screen I have ever seen. It pours torrentially, it trickles off to a shower; it runs down the inside walls of the farmhouse; it turns the upstage area to mud; and it totally engulfs us in the Coveys’ world. It is, in short, a stroke of genius in a tiny, limited budget, theatre that is in no way surpassed by the techno flamboyance of some Main Stage theatre with 100 times the budget. Evocative and truthful, it draws us into King’s world without the need for suspension of disbelief. I can’t imagine this play presented any other way. The fact that there was torrential rain as we ran from the carpark to the theatre, only added to the credibility. Mumford’s talent is enormous. Add to this the brilliant sound design by David Maloy and wonderful lighting by Amelia Lever-Davidson and we are transported to the Coveys world and share their fear of the power of the Foxfinder. 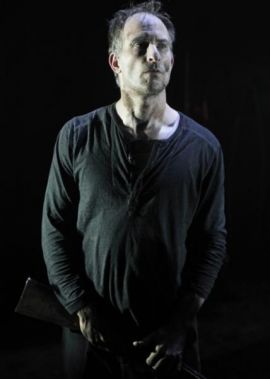 David Whitely (Sam), who recently resigned after 10 years as the company’s Artistic Director, gives a compelling edge to the farmer who is losing everything around him, and doesn’t know how to fight back. It’s a fine performance on all levels and totally convincing when you see the tears prick his eyes and he’s standing perhaps 3 metres away from you. When rage finally engulfs him, you shrink back in your seat, so powerful is the emotional impact. Joanne Trentini (Judith) is gut-wrenching as the woman trying to save everything that is her life, and restore normalcy, despite her husband’s rejection. Willing at first to believe everything she is told, she moves through uncertainty to desperation, to resignation and we empathise with every moment of her journey. The beautiful Rosie Lockhart gives great support as Judith’s  secretly rebellious friend and confidante. But the true break-out performance is from the astonishing Matt Whitty, who has shown over his brief but stellar career that here is a young actor capable of taking on the world. His presence is charismatic, his awareness of everything going on both externally and internally is astonishing. His emotional range is powered by truth. It is masterful acting on every level. Already, for me, Whitty’s name in a cast list would be enough to ensure I would want to see the play.

It seems superfluous to say that this is another masterful production from Red Stitch. They set the bar very high and it is a pity so few companies can follow. But then, I suspect Red Stitch is only competing with itself. And that means better theatre for all of us.