Foxholes of the Mind 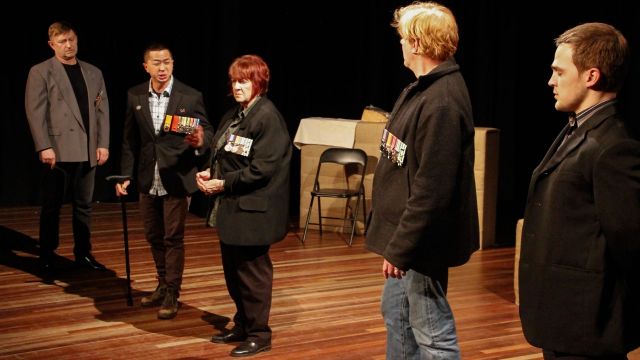 When playwright Bernard Clancy is asked why he wrote Foxholes of the Mind, his response is ‘to save lives’. First performed in 2010, his poignant play about the aftermath of war and the ongoing, unseen wounds of the men and women who served, delves deep into the psyche of several characters.

Post Traumatic Stress Disorder (PTSD) is a condition shared by many who returned home from war. Clancy focuses on returning serviceman and women who served in the Vietnam War. It is evident early in the piece that psychological trauma lives on long after these men and women return home to their families. His story focuses on five souls deeply scarred by their experience.

Director Wolf Heidecker has assembled an experienced cast to breath life into this important story. Given the Vietnam War ended over 40 years ago, the ages of the cast were important to add to the authenticity. The action centres around a support group for those living with PTSD. Frank (Peter Finlay) is disgruntled at his doctor’s referral to attend the group. He seems conflicted about his diagnosis, but his marriage to childhood sweetheart Trish (Joanne Davis) is unravelling and this may be his last hope to regain control of his life. Both actors conveyed their frustrations well, with their chemistry adding to the powerful storyline.

Adrian Mulraney was tasked with portraying several characters attending the support group. Whilst he did well to differentiate between each personality, it was not clear why the roles could not be filled by three actors. That being said, changing his voice, posture, and the added use of a walking stick, allowed the audience to follow each individual story. His characterisations were sincere and well delivered, evoking empathy when needed.

Clancy should be applauded for including the character of Sheila (Maureen Hartley), a nurse who attended to the wounded in Vietnam; it was an especially important element that is missed too often when there is a dialogue about war. Hartley was thoughtful in her portrayal.

Clancy added characters to later adaptations of his play. Nigel (David Lih) plays a Vietnamese refugee baby who later enlists in the Australian army, serving in Afghanistan. Psychologist Mark (Victor Gralak) introduces Nigel to the group, offering an interesting perspective on the effects of war.

Lighting and sound designer, Richard Lyford-Pike used his expertise to differentiate between current action and flashback moments in the script. This worked well and added urgency to emotional scenes.

The Adelaide season was staged at the Royalty Theatre, a large old theatre with a capacity of 600 people. On opening night, there were only fifteen people in attendance. It was disappointing, as the production warranted a larger audience. The play would have fared better in a smaller theatre: the deeply personal narrative would have been even more powerful in an intimate theatre setting.

There is no argument that this is an important story to be told. Although the war is over, the harsh reality is that many still live with the trauma of those times. PTSD has the power to affect every morsel of life: families, relationships, employment, and general happiness are threatened. By creating a dialogue around a painful topic, it may allow better understanding and empathy to all those affected.

This touring production is only made possible with government funding.