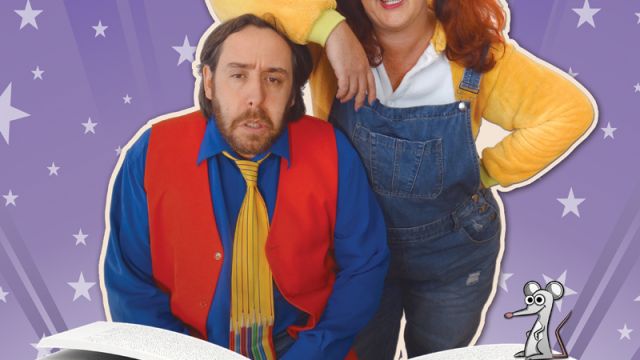 Fractured Fairytales by Last Dodo and performed by The Nitwits (Matt Grey and Kathryn Placing) has come to Adelaide after winning Best Kids Show at the Perth and Sydney Fringe Festivals. It is for children between the age of 5-10 years old, and from the delight the children showed at the hot afternoon performance I saw, it is a complete success.

After entering The Speakeasy Tent the audience is given very small cushions before taking their seats; the reason for this becomes clear at the climax of the show. Matty (Mathew Grey) enters as ‘Prologue’ and warmly welcomes everyone, especially the children. He warns us that this show is a bit ‘noisy’ - and it is!

Rapunzel has massive long hair growing from her eyebrows, Puss in Boots is ‘a cat in a (car) boot who goes around solving crimes’, while The Emperor’s New Clothes is a tale about ‘fashion’. Cinderella is a strange tale – when the spell breaks, ‘why don’t the glass slippers disappear?’ The solution? Her whole foot is cut off and disappears! Sounds gruesome and it is, but the children roared with laughter. Even Disney’s‘Let it Go’ from Frozen is sent up – it becomes about farting, in which all the children are encouraged to blow ‘raspberries’ on their arms – again, lots of giggles.

There is a considerable amount of audience participation, which is delightful. Parents cop it a bit. At one point Matty asks ‘who has an evil Mum?’ To the amused horror of the Mum’s present, all the children put up their hands. One Dad is brought up on stage to play Prince Charming opposite Tetley Bear as Sleeping Beauty, with a very large Justin Beber mask. Hilarious!

The best sequence, however, is the climax of the show – Goldilocks and the Three Bears. In this version Goldilocks is an American gangster and his Three Bears are his henchmen, which are played by children from the audience. Actually, they had four bears/four children, which didn’t matter, as at this stage the whole thing was evolving into sheer and fabulous anarchy. Tetley Bear is Head of the Bear Army that has to defeat Goldilocks and his Four Bears. Who is this Bear Army? Why, the rest of the children in the audience and the adults of course! What then ensues is a massive pillow fight, using the small pillows that we had been given when entering. It was fantastic!

It was so wonderful seeing the children and their parents enjoying and responding to this terrific piece of stage anarchy - not an easy thing to accomplish.

As Matty kept saying to the children of the Bear Army, ‘Do not come onto the stage’ – and they didn’t, but still it didn’t stop the sheer fun and excitement of this hilarious climax to Fractured Fairytales.

This show is well worth a visit for parents who wish to introduce young children to the fun of the theatre.