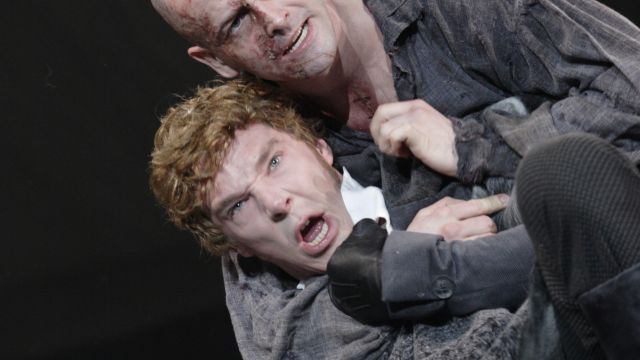 Whilst we may have bemoaned in the past the lack of access to some of the West End’s most challenging offerings, London’s National Theatre goes a long way to rectifying the problem with its series of filmed plays.

Frankenstein is one such play, adapted by Nicholas Dear from Mary Shelley’s famed novel. Danny Boyle, despite having his roots in theatre, directs with the keen eye of a filmmaker, with stunning visual effects. Mark Tildesley’s set design is quite astonishing, with a house rising from the depths of the Olivier theatre, birds flying from treetops…a complete train (perhaps a little indulgent given its use) appearing on tracks and rain falling on a narrow strip of grass which grows before our eyes. The lighting is simply superb – a canopy of individual bulbs like a giant spaceship watching the action – reminiscent of Close Encounters or Childhood’s End. Dear and Boyle have expanded on Shelley’s themes of rejection, social injustice and disparity and even hypocrisy and the nature of class, and the story seems incredibly pertinent now with science and technology making creation itself (beyond cloning) breathtakingly imminent.

The supporting cast is certainly more than adequate, with Karl Johnson giving a lovely performance as the blind exile who is mentor and teacher to the creature; but it is the two stars, Benedict Cumberbatch and Jonny Lee Miller, two of the finest actors living, that transport us and cause us to catch our breath in both shock and admiration. Though they alternate the roles of Frankenstein and The Creature, at the performance I saw Cumberbatch was The Creature and Miller the scientist.

There are no words to describe the first fifteen minutes of the play as The Creature, mute and barely alive, takes us through an accelerated curve of evolution. Cumberbatch is extraordinary; sometimes almost clown-like, at others a new-born foal trying to stagger to its feet. He appears double jointed and his wrists and ankles seem to bend the wrong way. We are captivated as we would be by a new-born baby suddenly walking so soon after birth. His physicality is matched by his emotional development. Cumberbatch gives The Creature a humanity, intelligence and dignity that draw our compassion and allow us to share the astonishing journey he embarks on. We almost weep when he says plaintively “I am lonely” or quotes Milton’s Paradise Lost; and yet the actor never allows us for a moment to forget the menace in the creature, the unpredictability of the monsters we create turning against us.

Jonny Lee Miller, always a dynamic actor, is the Scientist who abuses his power – the flip side to the creature. He is stunning and the relationship between the two is so symbiotic, so entrenched, it is like watching two aspects of the same character. The new ending, where the two seem destined to follow each other for eternity into a green ice wasteland of the North Pole, has elements of Dante’s Inferno…though here the eternal damnation is the freezing wasteland rather than the fiery pit. There is even a music underscore by the Underground, used for emphasis.

This is theatre of the highest order, superb in all aspects and this short return season is by popular demand and ends this weekend. See it at least once, but preferably twice. Cumberbatch and Miller will amaze you.