Get Sweaty with Cheryl and Chardee 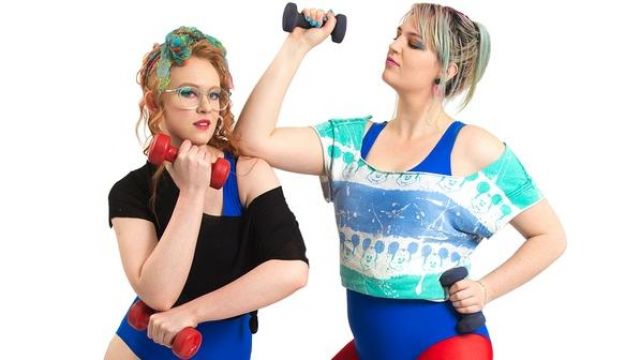 Cheryl and Chardee met at dance class in their teens where they formed a strong bond over their mutual love for the much adored and sadly missed morning television show “Aerobics Oz Style”. From humble beginnings in Elizabeth Downs these two have forged a semi- professional fitness empire receiving testimonials from the rich and famous, including Oprah Winfrey no less.

Their empire has been based on a strong belief in moderation and acceptance of one’s body, jiggly bits and all. In fact, when a former partner to the empire, Dallen, decided to embellish his assets with a pair of socks, the girls parted ways with him, realising he could never be an advocate for their brand. And whilst moderation might be the mantra, there is nothing moderate about their love for all things 80s, from Jane Fonda to Richard Simmons, Leg Warmers to G String Leotards – not a hint of  HIIT or Crossfit in sight. These girls have been left behind by a fitness industry that has moved on, but what fun it is to revisit some of those nostalgic moves, even if Cheryl has been to rehab with a severe case of Grapevine-itis.

Mikayla Lynch plays domineering and narcissistic Cheryl beautifully, allowing Alicia Norton, as the less confident and overshadowed Chardee, to play on the sympathy of the audience.

Lynch and Norton pack a lot into this 50 minute show but it would be great to see them explore some elements more deeply. I for one would love to hear about all the celebrity fitness videos from 1980s, and while they covered a few, the list is long and there are a few more laughs they could get there.

This is a fun night out, especially if you remember those groovy 80’s aerobic moves, with plenty of opportunity for audience participation. You might even get to shake your groove thing.