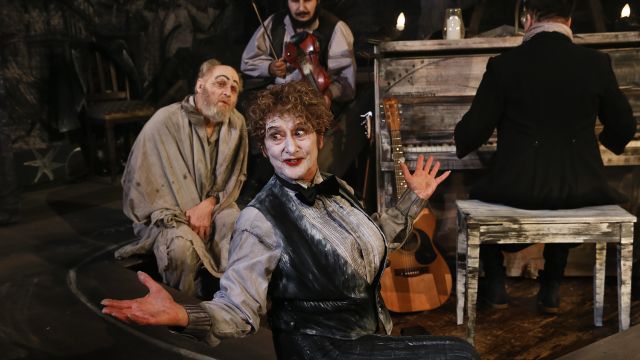 The Ghetto Cabaret is a moving tribute to all the people who survived or perished in World War Two and a stark reminder of the resilient human spirit in troubled times. This show has been written, created and performed by Galit Klas and directed by Gary Abrahams in collaboration with Kadimah Yiddish Theatre and Kadimah Jewish Culture Centre.

Evelyn Krape is the bedraggled master of ceremonies and one of the seven ragamuffin performers who take us on a heart-wrenching adventure through the souls and minds of starving artists trapped in the Jewish Ghettos across Eastern Europe, while they wile away their time with music, song and dance. Krape is a magnificent stalwart performer who conducts the show with versatile flair, and bears an uncanny resemblance to Emcee (Joel Grey) in the film version of Cabaret (Fosse, 1973).

When one’s life is on a razor’s edge, the artistic spirit bellows out songs of an unbroken determination to live for maybe one more day. Authentic Yiddish songs and poems composed in the ghettos, reflecting on hardship, famine, disease and the encroaching Nazis are all sung with fervor and zeal by the evocative, talented team that also includes Dimity Shepherd, Jim Daly, Nelson Gardener and Joshua Reuben. 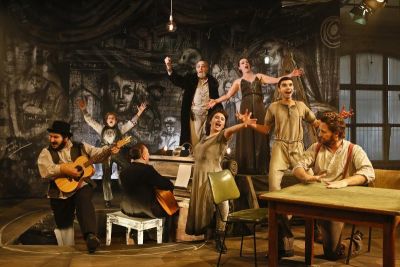 Despite the oppressive nature of war the artistic collective gather their resources and perform, burrowed down in overcrowded hellholes with untimely death surrounding their every move. Klas and Abrahams have together created a piece of magical theatre that playfully generates thought-provoking cabaresque vignettes that question the evils of war and the untimely deaths of millions of people.

The pianist (Scott Griffiths) and fellow musician (Alex Burkoy) sit in their own makeshift pit. The set design offers exquisite visual detail, comprised of a sketchy black and white backdrop depicting the ghetto life and a small set on the side of the stage which captures the cramped and overcrowded spaces of ghetto life.

“The naughty Nazi puppet” show is a satirical insight into the atrocities of the holocaust, and along with other cinematic theatrical tropes that include the strobing miniature train, provide confronting visual effects that create another dimension in a show that relies heavily on realism and historical truth.