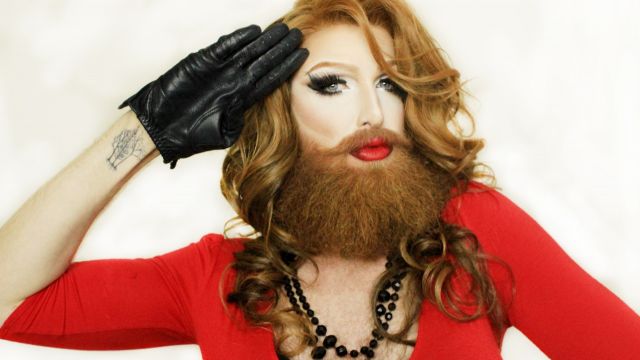 I used to think that Rhonda Burchmore had the longest legs in the business, that is, until I met Gingzilla: Glamonster vs the World.

The show starts before you even enter the Spiegel Zelt. Glamzilla, ever the hostess, dressed as a cinema usherette from bygone days, passes out cups of popcorn and Jaffas and gets to know her audience.

The atmosphere of the Spiegel Zelt perfectly complements the show; bright, loud with the audience seated right up to the stage. Sitting in the front row, I was wondering if I would need a chiropractor’s services to look up at the tallest woman I have ever seen. I need not have worried; once the show began my worldly worries vanished for an hour.

Gingzilla: Glamonster vs the World is an homage to 50s & 60s horror B-movies such as Attack of the 50ft Woman,Godzilla andKing Kong. Initially we meet an ordinary woman (if that is possible) who just wants to please her husband by following onscreen tutorials using vintage clips featuring Gingzilla photo-shopped. This technique is used to terrific advantage throughout the show.

Of course, for a Glamonster like Gingzilla, this is never going to work, so she breaks freeand discovers her super-woman powers, throws off normality, and becomes the glamorous ginger monster she was destined to be.

We were treated to a night full of comedy, lip-syncing, singing, glamorous costumes and audience participation that had the audience rocking in their seats. This reviewer was privileged to be included as part of the show. Not everyone can boast having a 7-foot glamonster sitting on their lap with their hands cupping her breasts.

Other members of the audience were fed popcorn, ice cream and soft drink in Ginzilla’s own special style during intermission.

While Ginzilla does lip synch accompanying audio and talks to an invisible presence, the highlight is her own voice, which soars to the heights and then to seemingly impossible depths. Her vocal numbers are a highlight.

I’m sure every woman in the audience marvelled at her ability to move, dance, bend and twist in impossibly high heels teemed with burlesque-like costumes and wigs. Like the rest of the audience I sat there, open-mouthed and with the biggest smile on my face and laughed uncontrollably.

Mirroring Kong in King Kong she is captured and put in chains (even though she tells us they are $9.95 and available from Bunnings).

Will she rise again? Well, you will have to see for yourself and witness the experience that is Gingzilla: Glamonster vs the World.