The Girl The Woman 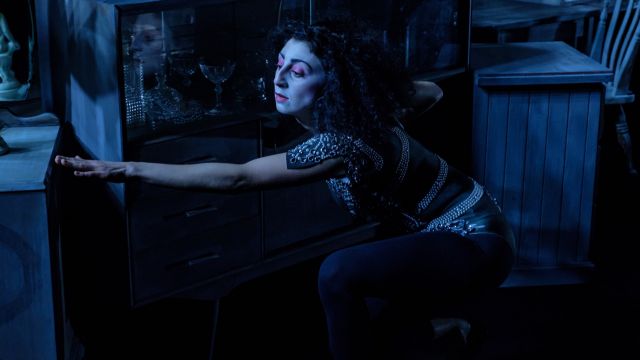 To say this production is a work of love would be to understate the concentration of experiences and diverse performance styles Aanisa Vylet has artistically fused “to smash the limitations of how female narratives can exist on stage”. Nor would it adequately explain the feeling of ‘family’ that radiates from the production. Vylet’s story has been lovingly nurtured by a very sensitive and perceptive director, a talented, imaginative design team, the collaborative support of the National Theatre of Parramatta – and the “world of magic, diversity and community” that is Western Sydney.

If that sounds like I’m waxing too lyrical, please, go see and feel for yourself!

Walk into the theatre and be intrigued by the way designer Jonathan Hindmarsh has melded a collection of cupboards – two wardrobes, a bookcase, a piano, two dressers, a sideboard, two dressing tables, three sets of drawers, five lamps, a suitcase and a birdcage – into a multi-levelled, multi-shaded grey escalation of time and furniture fashion. Be warmly welcomed, even shown to your seat in some cases, by Vylet herself, greeted by co-star Nisrine Amine as she sits atop the barricade of cabinetry. 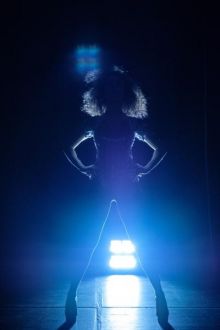 Then be drawn into a brave performance that uses a coalition of language and imagery, sound and movement, light and shade to tell a story of growing up, venturing out, and coming back. Vylet’s character is every daughter. Amine’s is every mother. Their stories reach across cultural and religious boundaries. Nisrine’s amplified voice breathes limitations and desires. Vylet animates them in sound and expressive mime. They connect across space to confide and confront – together retelling stories which are totally relatable.

Watch how lighting designer Benjamin Ross Brockman creates shadows that evoke the secrets hidden in drawers and behind doors as Vylet climbs nimbly over the symbolised hurdles that the events – and the set present – or as Nisrine edges her way through them as she assumes the frailties of illness and despair.

Be surprised as Vylet moves into the audience and the unusual results of her daring propositions elicit. Be moved by the myriad of memories and emotions that are evoked by a word or a phrase, a recognisable gesture – or a shared anguish.

This is a production where timing is critical, where action, sound and light are interdependent, where direction needs to be intuitive, understanding and discerning. Hearing director Dino Dimitriadis speak so tenderly of the joy this collaboration of creative forces has been is indicative of his broad, imaginative vision and insightful prescience.

In a vibrant performance, Aanisa Vylet’s “first attempt at creating my own theatrical language and form of storytelling” is moving, heart-warming and more than a little bit funny.