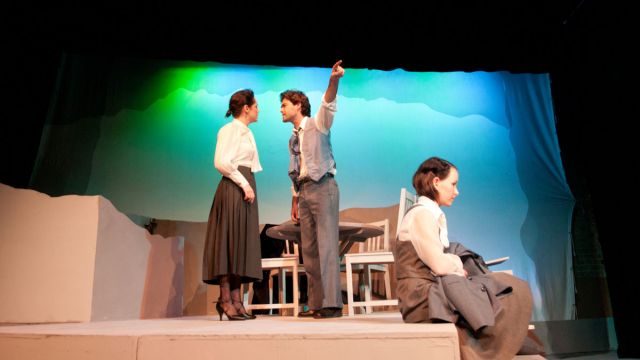 Universal themes, including family, desertion, broken dreams, dealing (or not) with reality and the impact of our decisions on others, are at the heart of Tennessee Williams’ first great dramatic success, The Glass Menagerie, an autobiographically inspired memory play.

A slim plot provides the hook on which to hang an intense, complex psychological drama.

Many years after the events of the play, Tom Wingfield narrates reminiscences of life with his mother Amanda, a delusional faded Southern Belle, and his painfully shy and mildly crippled sister Laura, in a drab St Louis apartment, culminating in the long anticipated, yet ultimately anti-climactic arrival of Laura’s ‘gentleman caller.’

Tom tells the story from memory, while Amanda retreats into nostalgic memories of her youth, and attempts to drag her children into them. Inability to accept bleak reality results in each family member retreating into more comfortable fantasy; Laura, to her fragile collection of glass animals and gramophone recordings, Tom, to movies and booze, and Amanda, into her past.

Genesians’ Spartan staging of this sad, brittle drama throws the emphasis right onto the fine, truthful performances of the cast.

The complex, contradictory Amanda Wingfield is one of the great roles of the American theatre. Katherine Shearer truly inhabits this intriguing matriarchal monster, finding a natural dynamic across all her swings and shifts. Her determined grip on fantasy is potent, while her second act transformation, to once again become the Southern belle, is a joy. 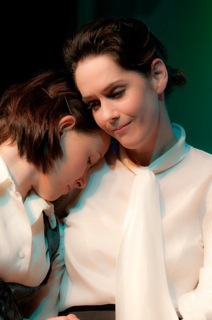 Shearer’s Amanda is an unintentional monster, naïve, with only the best of misguided intentions for her children. She also finds the pathos of a woman bound to the past, deserted, and destined to be deserted again.

Michael Sutherland gives a sensitive, conflicted portrayal of Tom, evoking real empathy for the son torn, past and present, between responsibility for his mother and sister, and the pursuit of some sort of personal dream or adventure.

Andrew O’Connell’s interpretation of Jim O’Connor absolutely exemplifies the ‘gentleman caller’ of Amanda’s fantasy for her daughter. His genuine portrayal is gentlemanly, assured, caring and warm.

There’s real beauty, and, for a moment, and a sense of hitherto unlikely possibilities, in the moving scene between Hogan’s Laura and O’Connell’s Jim.

The production effectively utilises a set that is at once multi-level, yet very neutral and basic, with props and furnishings kept to the barest functional minimum. I wondered about inconsistencies in the minimalist convention, miming cutlery, for instance, but using cigarettes and glasses.

Initially, I found the tempo a little slow, perhaps because there’s so much set-up and exposition before shifting into the cracking drama of the second act. Later, though, I thought that perhaps this deliberately represented the pace of memory and recollection.

At play’s end, a tender moment between mother and daughter truly touched me.