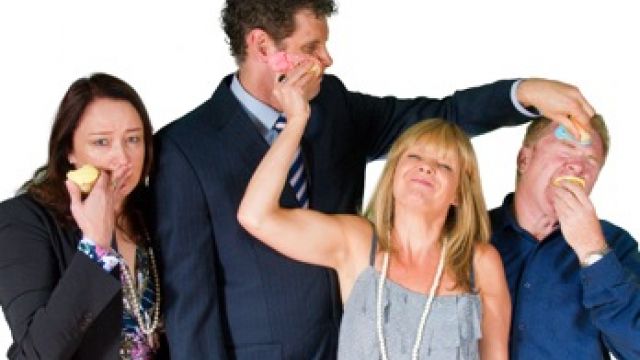 Hayley and Malcolm Horton’s (set design) aspirational middle class living room is signaled by a coffee table groaning under piles of trophy books and a cubist display cabinet sparsely inhabited by a few mementos. French playwright Yasmina Reza has written a brace of extremely popular major award-winning plays – this one was produced by State Theatre a couple of years ago.  You may notice the similarity to David Williamson in the lampooning of the tussle between the left and the right, and an exposé of pretension and suffering in the suburbs.

Two couples meet to discuss a hitting incident between their kids and things go from bad to worse as their masks of integrity slip away.  This is a great study of the clash of reactions and how each person handles or ignores their emotions.  Amazingly, Australian Christos Tsiolkas’s novel, The Slap, was published the year after Reza’s play opened in Zurich in 2007. 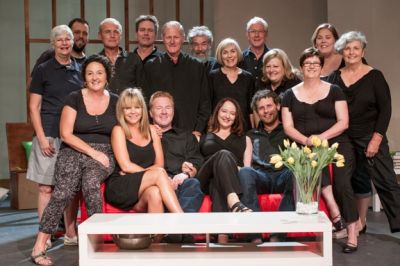 There are only four of them and they are all good. Petra Schulenburg is especially sick as the suffering wife of a weasel-word lawyer played by Paul Talbot.  Paul is every annoying inch of what he’s supposed to be but if I see another play dominated by a mobile phone, I’m going to throw up.  Rachel Burfield as the mother of the victim-child was a little too histrionic and Tim Williams played well the quietly fuming emasculated warrior. It was opening night and everybody could loosen up.  Director Hayley Horton got the best out of the best moments but more invention was required elsewhere.  Blocking and movement was not always natural looking, but some of Reza’s transitions aren’t very natural either.  Josh Horton’s poster and program cover have an inspirational design from the point of view of the non-appearing kids. An entertaining look at ordinary people driven by their self-delusion into bad behaviour.