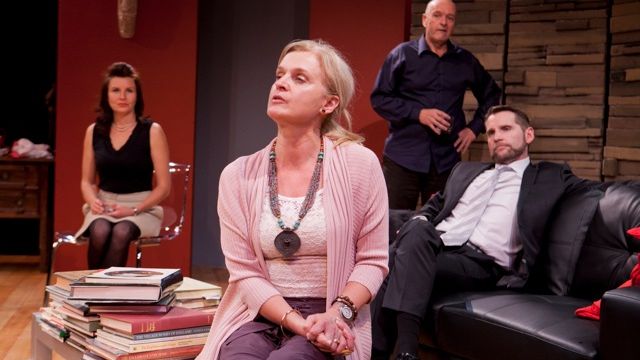 1812 has another successful production on its hands thanks to the considerable skills of young director Justin Stephens and an exemplary cast. Once again the line between Community Theatre (amateur) and professional theatre is blurred to a mere faint smudge.

Yasmina Reza’s hit play, based on a true incident, examines what happens when  politeness and niceties are dropped and truth takes over. Annette (Rhiannon Leach) and Alan (Stephen Shinkfield) have come to the home of Veronica( Angela Glennie) and Michael (Adrian Carr) to formally apologise for their son hitting Veronica and Michael’s son with a stick, causing damage to two of his teeth. As the controlled hysteria gives way to unbridled histrionics, we discover the truth about the relationships of both couples. A simple premise and well written. But since all four characters are somewhat unlikeable, I’ve seen the play fail dismally in other productions.

Not so in this new production. Using the smaller of 1812’s two performing spaces, The Bakery, designer Merinda Backway and her crew have created a fabulous set which puts us right in the living room of Veronica and Michael. Director Stephens’ blocking is marvellous, using every inch of available space and bringing his actors into touching reach of the audience. He never allows the pace to drop, except where the text itself enforces a much needed lull. The physical business is often as OTT as the reactions of the characters and the play works so much better with this farcical approach. We feel sorry for these people rather than actively disliking them and the overlapping dialogue gives a marvellous sense of naturalism to what could otherwise be too stylised a piece. Stephens is blessed with a great cast. So versatile is Adrian Carr that he must surely be at the top of every community theatre wish list. He makes Michael a thoroughly rounded three dimensional character with faults and foibles and a jaded acceptance (till pushed too far) of his wife’s pretensions. He’s such a fine performer that it’s easy to forget he’s also an award winning set designer and director. He’s a delight in any role, and when he turns on the music and dances on the couch, he gets the side-splitting laughter he deserves. Angela Glennie is his equal. Her overbearing protectiveness and neurotic reaction to the situation is deliciously on target. She speaks so precisely through facial expression and body language that often the dialogue seems superfluous. Rhiannon Leach and Stephen Shinkfield manage to hold their own in this illustrious company, but not without a struggle. Both lack the charisma and command of Carr and Glennie, despite being fine in the roles.

The choice of music (presumably by Stephens) is perfect, the sound is excellent, although the space is such that in the shouting scenes the voices were overpowering, and the lighting highlights the brilliant set to perfection.

This is another feather in 1812’s cap, and bound to figure in Community Theatre Awards. The residents in The Ranges are very lucky – but if you’re closer to town, make the trip. It’s well worth it.