God Of Carnage by Yasmina Reza 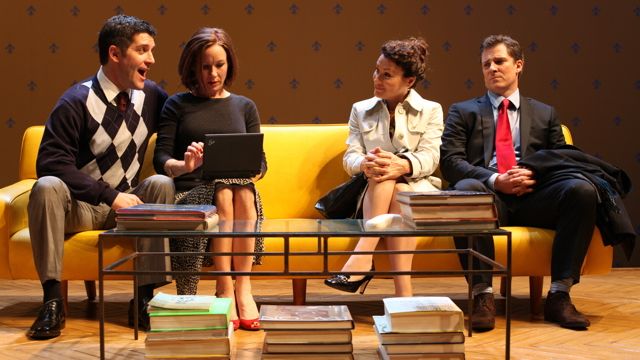 Yasmina Reza’s new play, God Of Carnage, starts with a premise ripped straight from the headlines – schoolyard bullying – in which two couples come together to discuss the action of their sons, Bruno and Ferdinand, where Bruno ended up with two broken teeth. The parents, Michel, a wholesaler of household goods, and Veronique, a writer who’s latest cause is what’s happening in Africa, and Alain, a corporate lawyer, and Annette, a wealth manager, meet at the home of Michel and Veronique. As the evening progresses, the mood swings from forced conviviality, to outright hostility as their façade of respectability falls away and their true selves are revealed. Reza’s take on humanity, that we are all ‘Neanderthal’s’ under the skin, is clearly spelt out by play’s end. It’s all set in France and there’s the rub. With references to things French throughout the piece, it appears odd that the actors should all speak with strong Australian accents. The current Broadway production, which uses the same English adaptation by Christopher Hampton, was reworked and set in Cobble Hill, Brooklyn, an upscale neighborhood. Why couldn’t the same have been done for the Australian production? These are universal themes and universal characters. We all know them. Wouldn’t it make it more pertinent to set it in Balmain, or New Farm? The actors - Andrew Buchanan (Alain), Jodie Buzza (Annette), Benj D’Addario (Michel), and Veronica Neave (Veronique), play the roles, but don’t inhabit them. Neave, as the culture vulture, Veronique comes closest to pulling it off. Direction by Michael Gow is perfunctory. There are laughs (not nearly enough of them) and lots of stage business, some of it not ringing true. When Annette throws up on the coffee table why doesn’t someone rush for a cloth to clean it up? How many houses in France have their power points in the floor? Who arranges fresh flowers in a waste paper basket? God Of Carnage is a good play, not as good as Reza’s previous success Art, but good nevertheless. It deserves a better production than this.
Peter Pinne