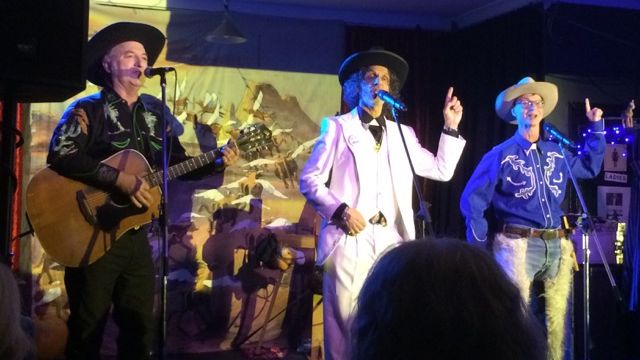 Gods Cowboys have arisen! And what a resurrection! After 22 years of wandering in the wildernesses of the Emerald City, the Messiah-istic messengers, Billy (John Knowles), Slim (George Catsi) and Buck (David Delves) have brushed off their stetsons, re-mounted their trusty steeds and ridden forth to consecrate the sanctum of The Petersham Bowling Club to re-enlighten the world.

Yea, verily, with their ecclesiastic sheep dip they will wash away the sin-icisms of the unbelievers and lead them from the genesis to the exodus of the religions of the world. They will reveal a true testament of scriptural insights like … it was not David, but Moses and his tablets, that got Goliath stoned!

It’s not easy to re-create a show that has ‘slept’ for 22 years, nor recapture the evangelistic energy that used to make it swing! But sometimes needs must. And this ‘need’ is one that affects the boys deeply.

John’s wife, Ronelle Knowles, was recently diagnosed with incurable cancer. Ronelle is a professional singer and musical director of the quartet Vocalicious and the choir ALCHEMY a cappella based in Petersham for 18 years. She is a full-time high school teacher, Scout leader and has just completed her Masters in History. The boys have brought Gods Cowboys out of retirement for two ‘fundraiser’ performancesin hopes to provide some financial assistance for John, Ronelle and their four young children in the uncertain days ahead.

Last Saturday’s show proved they still have it! It was entertainment all the way. The show gets off to a really resonating start as twanging twosome, Hank and Lou-Lou-belle (Marko Mustac and Lou Lou Pollard) introduce the band Good Tom Wallace to set the country and western scene.

And then Gods Cowboys hit the stage galloping, bringing the “fun back into fundamentalism” with their all singing, all dancing country ‘Cowbaret’. Back in the day, SMH reviewer Pamela Payne wrote:

“Gods Cowboys are assured, dynamic performers with a wicked sense of irony ... They play it straight from the holster with diabolical accuracy... these three performers create riotous comedy...they demolish without mercy all that their outward pose supports. They preach a method of sharp comic conception and takes the stage by storm!”

And they are proving that they can do it again!

Slim, the snake oil preacher; Buck, the desperado deacon; and Billy, the free-range altar boy are back in their saddles and riding high. Their resurrection has taken longer than three days – inspired by someone very special to many – but they have emerged just as full-on and funny!

In fact, ‘tis a pity there are only two shows because it seems to me that their brand of wicked parody and caustic satire is even more ‘now’ than it may have been ‘then’!