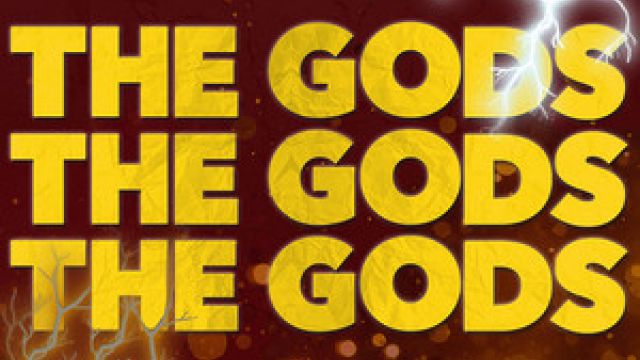 The Gods, The Gods, The Gods is the thrilling third installment about classical myths by The Flanagan Collective & Gobbledigook Theatre (UK), who have previously wowed Adelaide audiences with their brilliant versions of Orpheus and Eurydice. This time their focus is on the classical Gods themselves, a collection of dubious creatures whose place and meaning in the modern, as well as classical world is brought into question.

Unlike Orpheus and Eurydice, The Gods, The Gods, The Gods, is presented as a one-hour collection of four tales told primarily through songs and music – and it is fabulous. This is a much darker reading of the classical myths than Orpheus and Eurydice. In the previous shows the constant humanist refrain ‘The Deity is in You and Not in Books’ was a clever and poignant reminder that the individual human has a freedom of choice, and if that choice is to reject ‘The Gods’ then so be it. But what of ‘The Gods’ themselves when humans decide to reject them? They become abandoned lost souls mourning for a past life and a lost love.

This is the subject matter for this thrilling one-hour show performed with great commitment and excellence by Phil Grainger, Alexander Wright, Yoshi Colwell, with Richard Bethune on solo saxophone. The song that in a way encapsulates this entire show is the beautiful and poignant lament ‘You don’t have to love me’, which is sung by Alexander Wright with the entire ensemble. It was, for me, the highlight of the show as it touched on ‘the sublime’ in a way that I have come to expect from this truly excellent UK ensemble.

The range and performance of the 14 songs is also impressive, as is the dynamic staging. Those familiar with and who love (like myself) the fantastic immersive theatre works of Del la Guarda and La Fura dels Baus, as well as Mike Alfred’s Shared Experience, will absolutely adore this show. This is ‘immersive’ theatre plus. In the small dark confines of the Black Box Theatre in the Adelaide Botanical Gardens these three talented and skilled actors – Phil Grainger, Alexander Wright, Yoshi Colwell – and one enchanting musician, Richard Bethune move with great ease and impressive force through the standing audience and then back to the designated platforms inside the performing space.

This is immediate interactive theatre at its best with a fantastic life-force energy. It is loud, physical, visceral, boisterous fun, and at times extremely moving. This is the show to which you take friends whose notion of the theatre is to sit as simply passive observers. In this show the audience is not a passive observer but active participants. ‘The Deity’ may well be in you, and in this case so is the joy and wonder of the theatre itself – you are an integral part of this thrilling theatrical experience. Fantatsic!